Tiger Woods successfully came through his final practice session at The Masters. 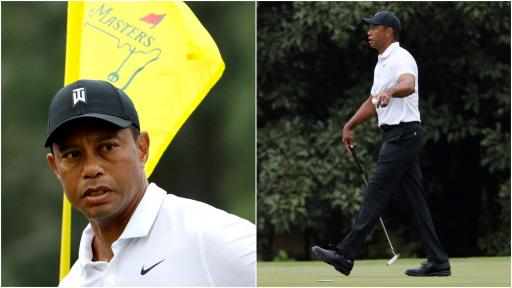 Tiger Woods successfully came through his final Wednesday practice day session ahead of making his competitive return at The Masters on Thursday morning.

Woods confirmed on Tuesday that he would be teeing it up in The Masters this week providing he could get through his last day of practice unscathed and that certainly appears to have been the case.

According to Golf Channel Golf Today host Damon Hack, Woods showed signs of a noticeable limp especially when walking downhill on the 10th and 15th holes but on the whole he looked happy and "locked in" ahead of the first round.

"Tiger's work on the golf course is at least done for the today," said Hack as of 11am on Wednesday local time.

"He arrived at Augusta National Golf Club at 7.20am this morning, he then spent about 20 minutes on the tournament practice area and then set off for nine holes, the second nine, alongside his good friends Fred Couples and Justin Thomas.

"Tiger was showing a noticeable limp, especially having to walk downhill on the 10th and 15th holes. Those particular downhill slopes seem to challenge his ability to walk, but he had a smile on his face for most of his morning.

"I then met Tiger as he finished his half round of 18 and there was a lusty applause that greeted him as he made an eight-footer for birdie. It wasn't a Sunday roar but it was a Saturday roar for Tiger.

Related: What's in Tiger Woods' golf bag at The Masters?

"He then left the golf course and spent about 25 minutes on the practice putting green, working on that gate drill that he made famous where he putts with one hand, with his left hand on his leg and his right hand hitting putts.

"He made five putts in a row one-handed from five feet, and he then put his other hand on the putter and made 10 in a row. He then stretched it out to 10 feet and made his first 10 footer before finally missing one.

"But Tiger looks locked in, looks good, he exited the putting green and then headed to the clubhouse and his work here is done. Now I'm told it's a case of finding the right combination of rest, rehab and a work out so he can be ready for Thursday at 10.34am."

Woods tees off with Louis Oosthuizen and Joaquin Niemann for the first two rounds of The Masters.

Golf Channel's Mark Rolfing is not quite so optimistic about how Woods was looking on Wednesday, more as a result of the rain that has somewhat hampered his preparations.

"I think the one thing Tiger is routing for is no more rain," said Rolfing.

"It was interesting watching him today that he was not walking with as much freedom today as he was on Monday.

"I think a lot of it is due to there was some moisture, we had a lot of rain, and he just needed to be a bit more careful today. You could see he was really having to pay attention to his walking.

"The weather report is not calling for any more rain, but cooler, windier conditons. I think for Tiger's sake, no more water coming down on the course will be helpful."

DOINK! Tiger Woods hits the ball collector on the range at The Masters