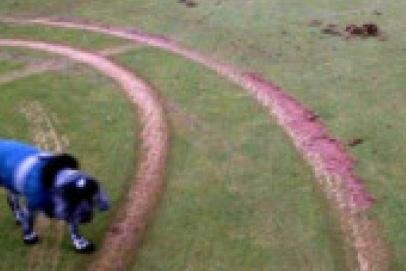 A VANDAL used a car to carve deep scars into a golf course in Linlithgow, causing up to £40,000 worth of damage.

The driver targeted two of West Lothian Golf Club's putting greens and at one stage was only a few yards from certain death as one of the holes had a 100-foot drop alongside it.

The joyrider first drove on the golf course on November 18 but returned the next night to cause further damage to the par-71 course, which was designed by two-time Open Champion Willie Park Jnr.

The PGA professional at the course, Alan Reid, suggested that it may have been the work of a "disgruntled member".

“The person had to know the golf course layout to do what they did. No-one can fathom what has happened because it’s totally malicious and carried out over two nights," he said.

“There can be no justification for this type of action that is sheer vandalism which has scarred the course and could potentially end up costing as much as £40,000.

“We have had to re-turf the greens which has a cost involved but because of the time of year we won’t know the full extent of the damage until May.”

Alan Gibson, general manager of West Lothian Golf Club, added: “It’s members’ hard-earned cash that goes into maintaining the greens and for someone to come along and cause so much damage within a few minutes is pretty soul-destroying for the members but also the green staff.

“We have never had anything quite as bad before – we have had stolen cars driving over the course that end up a burned-out wreck. But this is someone that knows the course. It’s ?sickening.”

It's been a bad year for vandalism on golf courses with a 'Go to Hell' warning drawn on one golf club's green, holes dug in another, and vandals using motorbikes to carve up the course at Moss Valley.