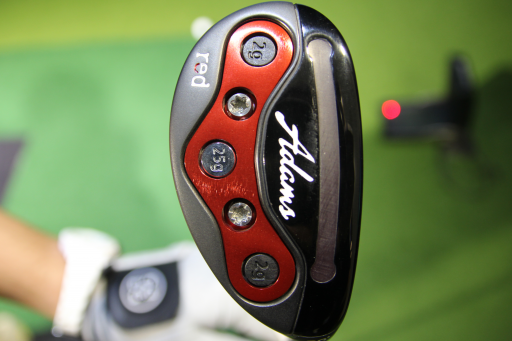 Adams Golf has placed a greater premium on versatility when it comes to its new better-player "Red" hybrid.

The maker of the number one hybrid on the PGA Tour since 2008 has maintained its award-winning upside-down head design that lowers the centre of gravity for easier launch, but shrunk the size of the head to provide better versatility from all types of lie.

What separates the Red hybrid from others in the Adams stable, however, is the introduction of three transferable weights (a silver 25-gram weight and two plastic two-gram weights) that lend greater shot-shape options.

In terms of the overall look, this is about as good as it gets for the low-handicap player as the head shape is compact at 95cc and the "Ghost Slot" is once again hidden on the crown - just as it was on last year's Tight Lies hybrid.

While it would be nice to see some sort of subtle alignment aid on the crown of Adams hybrids in the future, the club does sit nice and open at address with the clean white scorelines helping distinguish the lighter grey face from the darker grey crown.

The head felt a little heavy at times but the stock Matrix Altus Tour felt superb through impact and contributed to more of a penetrating ball flight than a high towering one.

Performance-wise, the Red hybrid - tested out in the 20-degree version - had the feel of a versatile, forgiving and powerful driving iron about it.

It proved easy to shape shots both ways, particularly a draw when moving the 25-gram weight into the heel - although moving the weights around did take some time at first - and when the heavier weight was placed in the toe, it was almost impossible to pull left.

Distance was as strong as we have seen from recent better-player hybrids with an average carry of 207 yards and total distance of 227 - proving four yards longer than when we tested a 19-degree Adams Tight Lies hybrid.

Offline dispersion was also very tight, with few shots veering more than 10 yards away from our target.

Yet again, Adams has failed to disappoint with a hybrid.

By far the most versatile and powerful hybrid Adams has ever designed, the moveable weights on the red sole plate not only strengthen the looks but they ensure an abundance of shot-shaping options.

Perhaps a little pricey at £169 given we are talking about a hybrid, but you cannot put a price on improving those green-in-regulation stats.