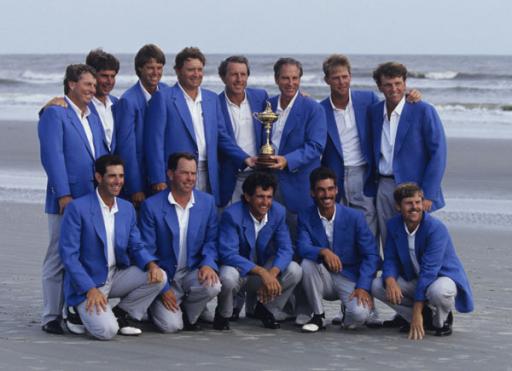 Perhaps best known as the 1991 US Ryder Cup captain who celebrated with his team by rushing in to the ocean off Kiawah Island, fully clothed with the trophy held aloft, Dave Stockton is still one of the world's greatest putters.

He won US PGA Championship majors in 1970 and 1976 and 25 other tournaments on the US PGA  and Champions Tour including three more Senior majors. He also played in the 1971 and 1977 Ryder Cup.

I caught up with him at the BMW PGA Championship at Wentworth this week where he was passing on his vast knowledge to a new generation of professional golfers as well as promoting the latest TaylorMade series of Ghost models he has helped to develop.

Tell us about your TaylorMade background

I've represented TaylorMade for nine years and I guess I'm a bit of a dinosaur because I've carried the Rossa bag which was the previous brand for these putters.

Roughly eight years ago was the first time I saw grooves in putters when I was shown that the higher the minus numbers you can get on the lab equipment, the faster your ball would start rolling and stop skidding and bouncing.

I remember Loren Roberts had the best numbers among PGA Tour players with minus 79 and I was the best on the Champions Tour with minus 138.

TaylorMade called me four months later and asked if I'd come down to their test centre to roll some putts for them for a new product with a grooved face. I rolled three balls, they recorded -201, -166 and -202 and the little guys in white coats were falling over themselves with excitement.

You have helped develop a new series of white TaylorMade Ghost putters. Explain your involvement

I remembered Nicklaus had a white fang putter and George Archer was forever painting his putters white. So when I saw that TaylorMade were thinking about white-headed putters, I just went nuts; I was delighted.

I told them that when I'm putting I want to see a face with at least four degrees of loft on it. Until two years ago, the TaylorMade computer was telling us that you need a maximum of two degrees of loft.

That was kind of hard for me because when I started on Tour I used Ray Cook putters which had four and five degreees of loft. Karsten Solheim at Ping came to me in the early 1970s and asked why I used that much loft and I told him that I like to see the face of the putter so I can tell where my hands are [in the stroke]. If I don't have enough loft I'm lost because I want my left hand to lead.

I've known about the R&D behind these putters for six or seven years but until now TaylorMade hadn't pursued it. But I'm having a hey day now.

Continued on next page...

TravisMathew to become the first brand to open a storefront at St Andrews
VIDEO: What are the Top 5 BEST GOLF CLUBS of all time?!
Bob Warters
Dave stockton
putting
TaylorMade
Ghost
Previous
Forest Pines: The perfect Solheim venue
Next
Czech out a new golf festival!