"Honma has a club which will make both scratch golfers and higher-handicappers play the best golf of their lives." 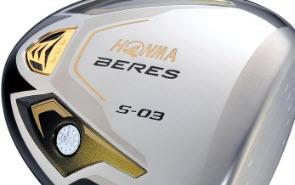 JAPANESE club-maker Honma is attracting a growing following in the UK after its reintroduction midway through 2012 but many golfers are still unaware that Honma also makes its own carbon graphite shafts.

The new-for-2014 Honma S-03 woods and IS-03 irons are set to change that, with a strong focus on correct shaft selection according to swing speed and golfing ability.

The secret is said to be in Honma’s own shafts, and the S-03 woods and IS-03 irons are powered by Honma’s top-of-the-range ARMRQ8 eight-axis carbon graphite shafts, available in five weights and four shaft grades, 2 Star through to Honma’s extraordinary 5 Star grade.

All shafts are hand-fitted by Honma’s master craftsmen in the company’s Sakata, Japan design facility. Honma woods are always sold in their finished form – never as component parts – and nor are Honma shafts sold separately from the clubheads.

“The S-03 series is all about the effective transmission of power through these amazing Honma shafts” said Honma UK spokesman Andy Hiseman.

“When we first showed them on the range at the PGA Merchandise Show in Orlando this January, several low-handicap testers commented on how powerful and workable the S-03 woods and irons were, and how well they suited the better player, compared to last year’s S-02 series.

“Now, with the S-03 series, Honma has a club which will make both scratch golfers and higher-handicappers play the best golf of their lives. The secret’s in the ARMRQ8, one of the sport’s most advanced shafts, which powers not only the S-03 series but our Tour World series too”.

Honma has engineered a proprietary variable-thickness face design into the S-03 Driver, which produces an expanded, highly durable rebound surface, for enormous distance. Available lofts are 9.5 and 10.5 degrees.

Honma’s accompanying forged irons, the hand-built IS-03 model, are the most powerful irons in the company’s 55-year history.

Available in 4 to 11 plus AW and SW (standard set is 5-10 irons), the forged Honma S-03 is a large-faced iron, toe and heel-weighted for a high MOI, and a deep, low COG for a stable, penetrating trajectory. A wide power face reduces mis-hits, and the model is 10% larger than 2013’s IS-02 equivalent.

Also available as a Left Hand model, the IS-03 has a gorgeous double-layer plated Satin finish. Clubheads are forged mild steel, and clubfaces are forged ES230 steel. As with the woods, Honma master craftsmen fit the ARMRQ8 shafts in Sakata, Japan, to the customer’s exact specification.

Over 100 Honma craftsmen work on every single club the company produces. Each clubhead is precisely finished, measured and balanced by hand, before it is shipped to the customer.

Honma’s Star System offers graduated options for clubheads and shafts as regards performance, materials and finish, running from 2 Star to the ultimate in golf equipment, Honma’s 5 Star grade. S-03 5 Star Woods are £5,095 and a set of six 5 Star IS-03 irons is £26,995.