How to spot fake golf equipment

TaylorMade's tips reveal the questions you should ask before you buy. Tell us your experiences 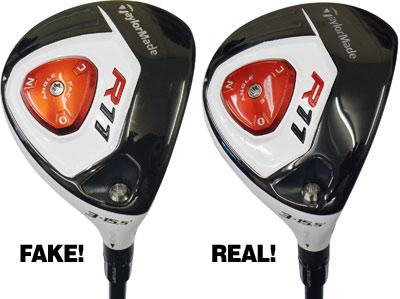 The growth of golf around the world, internet auction sites and the influence of China on the golf industry has prompted TaylorMade this week to issue a list of tips to ensure its customers that the clubs they buy are authentic.

The Basingstoke-based manufacturer says that despite the industry's efforts, sales of counterfeit and knock-off golf products continue and it is determined to stop golfers being taken for a ride.

Callaway, Cleveland, Nike and Acushnet (parent company of the Titleist, Cobra and FootJoy brands) are among the companies who have suffered from the boom in fake clubs and although it's reckoned that 60 per-cent of the world's genuine golf clubs are made in China, millions of poor quality copies also originate from there.

Here's a checklist of questions TaylorMade recommends its potential customers ask themselves. The same applies to almost any major brand:

I am looking at a set of clubs on eBay. How can I tell if they are authentic? Does the deal sound too good to be true? If it does, it probably is.

Are multiple clubs being sold together in one auction?

Club heads sold as separate components have an exceptionally high incidence of turning out to be counterfeit. Authorized major brand dealers do not sell club heads by themselves on eBay.

It may still be difficult to determine whether the goods the seller will send you are authentic. Sellers of counterfeit goods have resorted to tactics such as lying about the location of the goods and depicting pictures of authentic product while shipping goods that are counterfeit.

How can I tell if the clubs I just purchased are authentic?

You can compare your club against pictures posted on www.taylormadegolf.com or any of the major brands. If you notice differences in colour, shape, markings or finish quality, you probably bought a fake.

You may also consider taking your club to your local authorised dealer to be inspected but even passing a visual inspection doesn't guarantee that the club is authentic.

I bid on what I thought were authentic clubs on eBay. I received them, and they appear to be fake. What should I do next?

Your best recourse will be against the seller. You should contact him or her immediately. You should also notify eBay of the situation, referring to eBay’s policies and guidelines.

If you paid via PayPal, you should contact PayPal to inquire about whether they may be able to help you get your money back. PayPal’s policies and guidelines will also be clearly identified. You may also consider contacting the police.

TaylorMade does not compensate purchasers of counterfeit product in any way though you can help others avoid the same trap by reporting the seller to TaylorMade (or the appropriate leading brand counterfeited) and they will add the seller ID to its list of suspected counterfeit sellers.

In March, a dealer of bogus Titleist balls in Shanghai was sentenced to prison, the first conviction of a golf ball counterfeiter. And Chinese authorities co-operating with the US Golf Manufacturers Anti-Counterfeiting Working Group, raided four factories and three warehouses in Guangdong Province, seizing more than 16,000 counterfeit clubs, bags and other equipment worth $3 million, along with the molds and equipment used to make them.

Manufacturers of leading brands always recommend: "Only buy from authorised dealers a list of whom can be found on their appropriate websites under 'retail locator'.

Bet your life someone, somewhere has already created a counterfeit square-headed driver promised by Callaway and Nike in the New Year.

Click on our images below to see some high-res images of various fake golf clubs. Don't get caught out!

Tell us on the forum if you've been duped by fake clubs or even that you've purchased counterfeits or clones and found them playable.