A video of two golfers fighting on a golf course went viral and it left many fans wondering how such a thing could happen on the golf course. 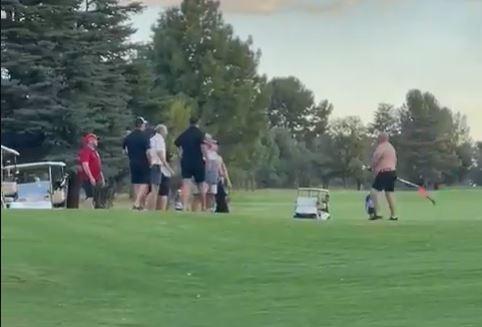 GolfMagic reported on Thursday that the video of the two men brawling had gone viral on social media and it had sparked a large reaction from golf fans all over the world.

The fight between the two men, which happened last week, was extremely heated and it got to the stage where one man took the flagstick from the hole and used it as a weapon.

According to the club's general manager, Deon Kruger, one of the men suspected that the other had stolen his mobile phone whereas he had actually left it on the 17th hole.

When they called the phone from the 18th hole, the other man picked it up on the 17th hole and this is when the owner of the phone thought that he had stolen it. It was also reported that neither man were the parents of schoolchildren from the school in Vaal.

Kruger suspected that alcohol could have played a part in starting the fight.

"There was a heated exchange of words and a rumpus when the players approached each other," Kruger said.

"This whole thing comes down too much alcohol and the players, who until then had been well behaved, drinking on the course. From the video you can see that both were incredibly wobbly on their feet.

"We do not condone nor allow drinking on the course but some players, like these, had snuck alcohol on to the course and were drinking while playing. The drinking resulted in this very unfortunate incident."

NEXT PAGE: GOLFER USES FLAG AS A WEAPON IN CRAZY FIGHT ON A GOLF COURSE