DP World Tour player Richard Mansell hit his tee shot on the famous 18th hole in a practice round to one foot, a shot that thrilled the crowds sat behind the green. 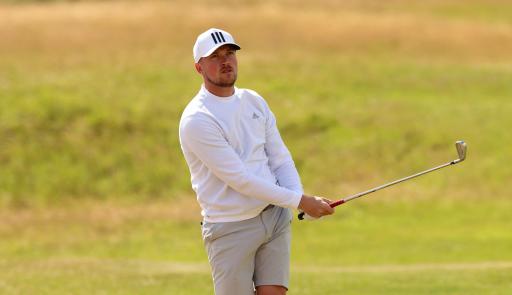 We have seen some players thrive on the 18th hole at St Andrews, but we have also seen players fall apart in the final stages of their round at The Open Championship.

DP World Tour player Richard Mansell certainly didn't struggle on this hole on Tuesday on the Old Course. Like many players this week, the Englishman took on the green with a driver.

He hit a solid shot and as he walked up to the green, he found that his ball finished about a foot from the cup and he was very close to making a sensational hole-in-one.

Mansell tapped in his easy eagle putt and received a loud cheer from the crowd behind the green. How he'll long for another eagle or two on the closing hole during The 150th Open Championship.

The dry and firm conditions this week could bring benefits and difficulties for the players looking to shoot low scores on the Old Course. Zach Johnson won the event in 2015 when it was last held at St Andrews.

Mansell was overcome with emotion when he qualified for the 2022 tournament in Final Qualifying at Hollinwell. He also went down this route to make it to the 2021 championship at Royal St. George's.

This will be just his third appearance at a major championship in his career. He missed the cut at this year's US Open at Brookline, so he will be hoping for more fortune at the home of golf this week.

The 27-year-old has made three top-10's on the DP World Tour this season and he is still chasing his first win since his first start on tour in 2020.

He finished tied third at the Porsche European Open and he has also made top-10s at the Dutch Open and the Betfred British Masters.