Sir Nick Faldo said everyone was in tears at the past champions dinner as Jack Nicklaus said goodbye to The Open. 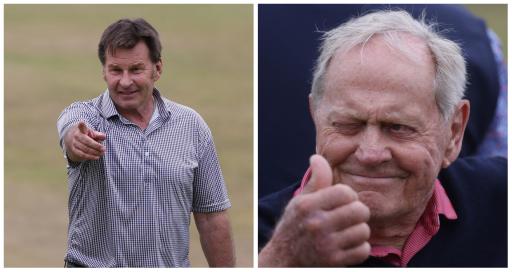 Sir Nick Faldo has revealed Jack Nicklaus left the past champions of The Open in tears as he bid farewell to the major.

On Tuesday, the past champions that included legendary players such as Tom Watson, Gary Player, Tiger Woods and Nicklaus all gathered at The Home of Golf to feast before the 150th Open.

According to Faldo, Nicklaus delivered an impassioned speech that left everyone in floods of tears. The Golden Bear won two of this three Open championships here.

Now the 82-year-old has decided that the 150th Open will mark his final appearance at the annual champions dinner. What a way to bow out.

There was chatter that Woods, 46, could have potentially retired from golf this week. Afterall, this is where legendary names have bid farewell to the game.

Earlier in the week, Jordan Spieth said that when he attends past champions’ dinners at majors he generally just enjoys the fact he gets to listen to the stories from the game’s icons.

In great company at tonight’s Past Champions Dinner. The last few days have been so wonderful, and I cannot wait for a historic week of golf ahead. pic.twitter.com/XCv9Amth9B

Two-time Open champion Greg Norman was not invited to the celebration. The R&A previously released a statement about this decision of which the Australian previously described as “petty”.

Rory McIlroy supported that decision, saying it was “the right thing to do” as to not detract from the landmark major.

McIlroy said in his pre-Open press conference: "It's The 150th Open Championship, and that's what we need to focus on. I think the focus would have been taken away a little bit if he'd have been here.

“I supported that decision, and I think right now, because of everything that's happening in the golf world, I think it was the right decision to be made."

Nicklaus did not want to comment on the decision itself. He did say, however, that they would remain friends with Norman “regardless of what happens” over the LIV Golf saga despite the fact they “don’t see eye to eye”.

Phil Mickelson reportedly declined the invitation to attend the past champions dinner.

The only LIV Golf player who joined the group was Louis Oosthuizen, who won the Open Championship at Muirfield in 2013.