Jordan Spieth has made noticeable swing changes in 2022, however, he admitted he's gravitated away from his new pre-shot routine in recent weeks. 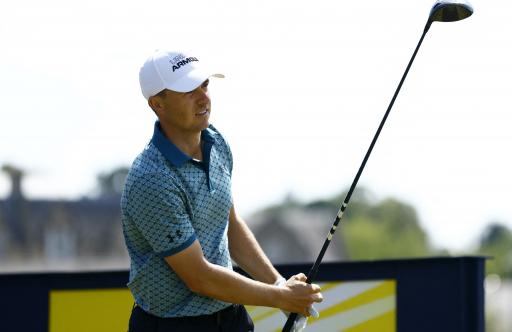 Jordan Spieth has previously spoken about his unique pre-shot routine in 2022, but he may have nothing to speak about in the coming weeks.

We usually hold our breath when one of the top players on the PGA Tour attempts to make swing changes despite such huge success, but Spieth has managed to maintain his winning instinct.

He beat Patrick Cantlay in a playoff to win the RBC Heritage earlier this season, his 13th PGA Tour victory, during a time when he was in the thick of deploying his new and recognisable pre-shot routine.

But at The Open Championship on Saturday, Spieth admitted he is trying to gravitate away from his half-swing preparation despite not swinging the club the way he'd like at St Andrews.

"I've maybe done it on two swings this week. I didn't do it much last week," Spieth said after his third-round 68.

"Maybe one of the rounds I did and the others I didn't. I'm trying to go away from it, but I haven't really swung the club very well this week at all. Even the rehearsals I'm doing behind the ball aren't quite hitting the spots I want to.

"That happens. I go two steps forward, one step back kind of thing. Just from round one, it hasn't really been on. I don't think doing a rehearsal over the ball would help.

"It can be done. It's more I'd rather not and just kind of be reactive. Here and there, I think I'll go back to different versions of it."

At 8-under-par, Spieth is most likely too far back from Rory McIlroy and Viktor Hovland to win his second Claret Jug. He may be disillusioned with his shot preparation, but it is another good week at a major championship for the 28-year-old.

Back in February, we spoke to Advanced PGA Member Duncan Woolger about what the former World No.1 tries to achieve with his pre-shot routine.