Jack Nicklaus says he no longer sees eye to eye with Greg Norman when it comes to the game of golf today. 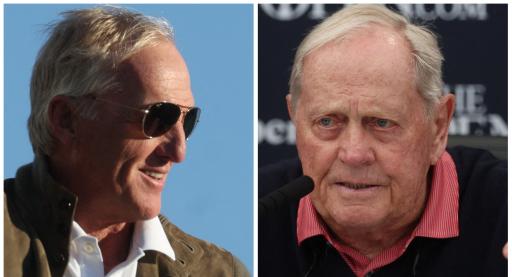 LIV Golf Investments CEO Norman, 72, claimed just last month that Nicklaus, 82, was a "hypocrite" who was once in favour of the Saudi golf league.

The Golden Bear previously said he turned down an offer north of $100 million for the role which is now occupied by The Great White Shark.

Norman told the Washington Post back in June: "100% truth? Jack's a hypocrite."

But speaking ahead of the 150th Open Championship where Nicklaus will be made an honorary citizen of St Andrews on Tuesday, the record 18-time major champion gave his thoughts about Norman.

Only he kept things short and sweet.

"Let me just sum this up in a couple of words," said Nicklaus, addressing the elephant in the room.

"First of all, Greg Norman is an icon in the game of golf, he's a great player.

"We have been friends for a long time. Regardless what happens, he will remain a friend.

"He and I just unfortunately don't see eye to eye on what's going on and we'll leave it at that."

Norman was last week refused an invite in the Celebration of Champions event to be held at St Andrews today.

The two-time Open champion has since hit back after his Open snub.

Nicklaus, a three-time Open champion and twice at St Andrews in 1970 and 1978, was speaking to the media ahead of becoming the third American to become honorary citizen of St Andrews, following in the footsteps of Bobby Jones (1958) and Benjamin Franklin (1759).

The record 18-time major champion was conferred by the Royal Burgh of St Andrews Community Council, which is the equivalent of the 'Freedom of the City' honour handed to Jones.

The ceremony will take place at St Andrews on Tuesday July 12.

Next Page: Greg Norman calls R&A "petty" ahead of The Open