Greg Norman has reacted by the R&A's decision not to be included in a champions' event ahead of The Open Championship. 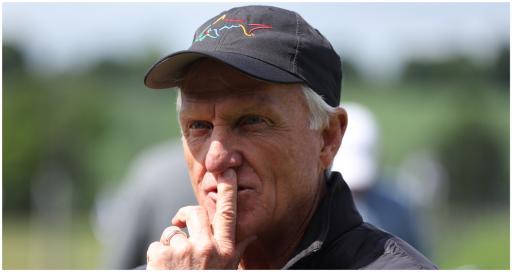 LIV Golf investments chief executive and two-time Open winner Greg Norman says he is “disappointed” with the “petty” decision by the R&A not to include him in a past champions’ event.

Norman, 72, was asked not to attend the R&A Celebration of Champions Day ahead of the landmark major at the iconic Old Course. The governing body said they hope to include him in the future.

They claim that the focus would be taken away from the event given the controversy surrounding the Saudi-backed LIV Golf league. Phil Mickelson has also decided not to take part in the day.

The R&A have invited an all-star cast of Open champions, women’s major champions, winners of amateur competitions and golfers with disabilities to compete at the famous Old Course.

Norman told the Australian Golf Digest: “I’m disappointed. I would have thought the R&A would have stayed above it all given their position in world golf. [It’s] petty, as all I have done is promote and grow the game of golf globally, on and off the golf course, for more than four decades.”

Tiger Woods and Rory McIlroy have both been included. Woods, 46, arrived at St. Andrews yesterday evening and enjoyed an evening stroll with his good buddy Justin Thomas.

McIlroy has spoken about LIV Golf ahead of The Open, claiming that he believes there is “no room for LIV Golf in the golf world” and that if it went away, he’d be “super happy.”

A statement by the R&A previously said: “In response to enquiries regarding The R&A Celebration of Champions field and the Champions’ Dinner, we can confirm that we contacted Greg Norman to advise him that we decided not to invite him to attend on this occasion.

“The 150th Open is an extremely important milestone for golf and we want to ensure that the focus remains on celebrating the Championship and its heritage.

“Unfortunately, we do not believe that would be the case if Greg were to attend. We hope that when circumstances allow Greg will be able to attend again in future.”

Norman previously sent the R&A a written request to participate in the major earlier in the season. The Great White Shark had hoped that he would be given an exemption to play.

But at 67 years of age, he is outside the limit of 60. The R&A said they had no plans to change the criteria.

Next page: Rory McIlroy says there is "no room for LIV Golf"