John Daly decided to wear a pair of bright orange Hooters trousers on day two of the 150th Open Championship. 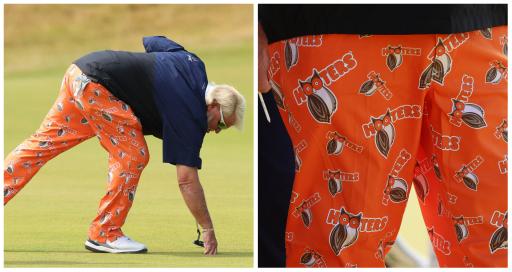 Can we all just pause for a minute and appreciate the trousers that John Daly is wearing on day two of the 150th Open Championship?

The 1995 Champion Golfer of The Year decided to wear a pair of bright orange, Hooters pants for his stroll round the Old Course.

As one fan pointed out, this is golf's oldest, stuffiest major. And Daly rocks these. Okay, then...

We've seen a number of interesting outfit choices at the landmark major this year that have turned a few heads.

Justin Thomas got tongues wagging with his outfit choice on day one.

Phil Mickelson, too, decided to wear a tee-shirt underneath his sweater. Patrick Reed also decided to rock all the LIV Golf gear.

But Daly's trousers? Wow. What do you think? Do they have a place here? They are certainly eye-catching.

Big John Daly casually strolling round in a pair of Hooters trousers at one of the stuffiest events in sport is absolutely hilarious. pic.twitter.com/ONLtNQkcdL

More: Phil Mickelson agitated by reporter at The Open

Daly carded a 1-over par opening round of the 150th Open Championship and later told of his joy playing alongside Bryson DeChambeau.

"They put the pins in good spots. Those were Sunday pins. They were brutal. It's hard to get the ball close with wind or no wind. It was tough for me.

"But I hung in there. I just had so many putts that -- it's tough to two-putt from 80, 90 feet when you've got about eight of them, eight or nine of them. It seemed like I'd make a bogey and then make a birdie.

"If I can get rid of the bogeys, hopefully tomorrow will be a better day."

Next page: The most unlucky break you will ever see at The Open