Rory McIlroy: No room for LIV Golf and if it went away "I'd be super happy" 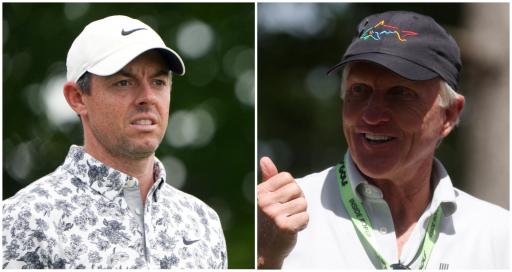 Rory McIlroy says there is “no room for LIV Golf” and if the controversial, Saudi-backed series went away tomorrow he would be “super happy”.

The Northern Irishman’s latest comments can be described as somewhat surprising, given that the 33-year-old has appeared to shift in tone in recent weeks and months.

McIlroy has always been a staunch defender of the PGA Tour and even went as far as saying that the Greg Norman-led league was “dead in the water” only a few short months ago.

But LIV Golf does not appear to be going anywhere. There have already been two $25million events which were won by South African’s Charl Schwartzel and Branden Grace.

McIlroy told CBS reporter Kyle Porter: “There’s no room in the golf world for LIV Golf. I don’t agree with what LIV is doing. If LIV went away tomorrow, I’d be super happy.”

It will be interesting to see the rest of McIlroy’s comments as golf’s elite head to St. Andrews to play the landmark, 150th Open Championship at the iconic Old Course.

There has already been some controversy as the R&A confirmed that two-time Claret Jug winner Norman wasn’t invited to the celebrations of champions day ahead of the major.

In a long interview today, I asked Rory to clarify some of his LIV comments from earlier this week. Here’s what he said …

“There’s no room in the golf world for LIV Golf. I don’t agree with what LIV is doing. If LIV went away tomorrow I’d be super happy.”

In a statement, they said: "The 150th Open is an extremely important milestone for golf and we want to ensure that the focus remains on celebrating the championship and its heritage.

"Unfortunately, we do not believe that would be the case if Greg were to attend. We hope that when circumstances allow Greg will be able to attend again in future."

Norman reacted by saying he was “disappointed” with the decision. Phil Mickelson also decided to pull out of the day.

McIlroy and Norman have previously taken shots at each other over the last year as golf’s apparent civil war has developed.

Norman claimed that McIlroy was “brainwashed” by the PGA Tour while McIlroy was jubilant when he won the RBC Canadian Open earlier in the season, taking him to 21 PGA Tour wins. Norman has 20.

Last night Tiger Woods arrived at St. Andrews and was flocked by thousands of fans as he played into the evening with Justin Thomas.

Woods, 46, previously played a practice round with McIlroy at Ballybunion in preparation for the major.

Next page: Jordan Spieth and his caddie in hilarious exchange in Scotland