Phil Mickelson is one of the most creative players in the world of golf and he showed this once again on Wednesday at St Andrews ahead of The Open. 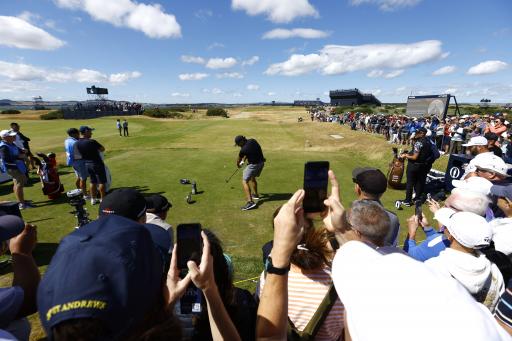 If you were told to name one hole at St Andrews off the top of your head, it would be the famous 17th hole, the Road Hole which has seen many players succeed and fail at The Open Championship.

The best players in each generation of the game have had to play a shot off the well-known road that runs behind the green. Some of them try a putt whereas others play a little chip.

Earlier today, Phil Mickelson was pictured by CBS' Kyle Porter hitting some shots from the road as he prepares to make his second appearance in a tour event since his three-month break from golf.

As Porter reported, Lefty was hitting chips with a 1-iron, deliberately connecting with the top of the ball to make it bobble towards the cup. Only Mickelson could experiment with this type of shot.

Watching Phil try to topspin 1-irons off the road and up the hill on 17 was mesmerizing. Perhaps my favorite part of the week so far. pic.twitter.com/3rLuepfRux

Mickelson is almost using a putting stroke with his club in this footage. It will certainly become an issue if he or any player goes long of the 17th green during the landmark championship this week.

The 52-year-old has been known to tinker with his golf bag and it's been widely suggested that a lot of players will be using a 1-iron or a 2-iron on the Old Course this week due to the firm and fast conditions.

Mickelson has kept a fairly low profile this week in Scotland as he looks to win his second Claret Jug. At the first LIV Golf Series event and the US Open, he faced frosty sessions with the world's media, but he avoided that this week.

He has been suspended from the PGA Tour off the back of his decision to succumb to the hundreds of millions that he has reportedly been given to play in the Saudi-backed series commissioned by Greg Norman.

Despite being a former Open champion, Mickelson joined Norman in not attending the Champions Dinner and the Celebration of Champions event which were both held on Monday.