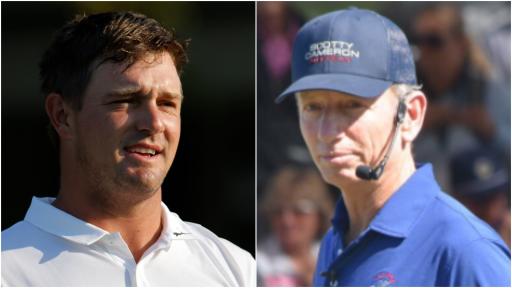 Rory McIlroy's putting coach Brad Faxon has ripped into the arm-lock putting method currently adopted by a number of the world's best golfers on the PGA Tour including Bryson DeChambeau, Webb Simpson and Will Zalatoris.

Faxon, 59, may be an eight-time winner on the PGA Tour but is best known for being one of the game's greatest ever putters.

After listening to a number of comments from the likes of Billy Horschel and Gary Evans calling for the arm-lock putting method to be banned in recent days, Faxon has thrown his hat into the ring too.

"In my opinion, we have to get rid of the arm-lock," Faxon said on Sirius XM PGA Tour Radio earlier this week.

"It's absolutely anchoring. If the USGA doesn't think it is, then they need to look at themselves in the mirror."

Other players on the PGA Tour to use the arm-lock putting method include Matt Kuchar and most recently Kevin Kisner.

According to Rule 10.1 in the Rules of Golf, a stroke is defined as the following:

RELATED: BRAD FAXON REVEALS A FUNNY STORY ABOUT RORY MCILROY AND HIS WIFE

Faxon, who is currently working as McIlroy's putting coach, believes the arm-lock method completely goes against the rules of golf.

"That is not swinging the golf club," said Faxon. "I don’t think that our founding forefathers of this game thought that you should be able to do that at all."

He added: "I will stick with that view for the rest of my life. Whether I'm a good putter or a bad putter."

NEXT PAGE: BILLY HORSCHEL BELIEVES THE ARM-LOCK PUTTING METHOD SHOULD BE BANNED