Brooks Koepka on easy course set ups: "It's been a theme for eight months"

Brooks Koepka says its nice to play a "tough course" for once at the WGC Match Play at Austin Country Club. 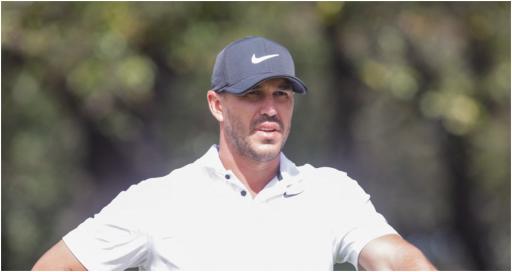 Brooks Koepka never shies away from voicing his opinion.

It doesn't matter whether he's bigging up his chances at the majors or if he's taking a not-so-subtle dig at Phil another player.

It is part of Koepka's draw as a former World No. 1 and a four-time major winner. He's charismatic and a thrill to watch when he's on form.

Koepka came into the WGC Match Play at Austin Country Club - like everyone else - looking to hit some form ahead of The Masters.

He managed to beat Erik van Rooyen in his first match of round robin play but he had to battle back from from being down early.

But after the sixth hole he took full command and emerged with a 3&2 win. He then spoke to the media and made an interesting observation.

A couple of players talked about how tough the conditions were. What did Koepka make of the tricky course set up?

"It's just nice to play a tough golf course," replied the 31-year-old, who was scheduled to take on Harold Varner III in his next match.

"For whatever reason the golf course setups we played lately have been quite easy, so it's nice to play a little tougher golf course."

Koepka memorably was on the rough side of the draw at The Players and couldn't tame his nemesis a the 17th par-3. He kept getting wet.

His only response was to laugh it off like an absolute maniac and move on to the next tournament.

Did he think the set-up at TPC Sawgrass was easy though?

"No, conditions were obviously a little bit different, but I mean every golf course we played lately has been kind of soft and very gettable.

"I mean, you go out Thursday, it was extremely gettable, I mean just conditions.

"But yeah, I mean I thought Tampa [the Valspar Championship] was kind of set up a little easy.

"I don't know, it's kind of been a little bit of a theme over the last eight months."

Koepka shot a 6-under final round at Innisbrook Resort at the Valspar Championship that Sam Burns won.

It was the best score out of the top-10 and Koepka later admitted it was "the worst score" he could have shot.

He was surprised at how "gettable" the course was. What do you think? Do you prefer birdie fests or watching players being really tested?