The golf world saw humour and horror in the socks worn by Bryson DeChambeau's caddie on day one at the WGC Match Play. 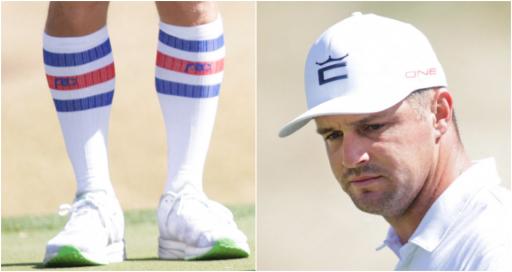 Love him or hate him, Bryson DeChambeau brings the entertainment factor when he plays on the PGA Tour.

DeChambeau marked his return from injury by sharing the spoils with England's Richard Bland at the WGC Match Play in Austin, Texas.

On his first drive, DeChambeau's ball ended up in a first aid tent. There were a few other loose swings and unorthodox lines he had to take.

Remarkably, DeChambeau found himself embroiled in a bizarre issue. His ball came to rest in a sprinkler head and he got relief.

No harm, no foul, right? Sure, but the exact same thing happened to Thomas Pieters about half an hour earlier on the same hole.

Pieters was denied relief and had a tantrum but it was later confirmed to be a mistake and they had to repaint the line for the hazard area.

Sorry but Bryson DeChambeau should be penalised a hole for his caddie wearing those socks. They are wrong in so many ways

@DellMatchPlay Hi guys. Just wondered if you know why @b_dechambeau caddie is dressed like an Asian school girl? #DellMatchPlay #giggletimes

Bryson’s caddies socks are genuinely mind boggling - did he just come from soccer practice? Did he lose a bet? Is he aware he’s on a golf course? I need answers!

Would you expect anything less from Bryson’s caddie? So on brand.

Did Bryson’s caddie lose a bet? What’s the deal with the socks? pic.twitter.com/tgqIkVCfoT

DeChambeau said of the debacle: "I was happy it was up first, then they said you can't get relief.

"I was like, what are you talking about, it's in the sprinkler head and outside of the hazard.

"I had a rules official come up and he clarified it to me, that Thomas didn't get relief.

"I was like, well, you guys did -- he goes, yeah, but we changed it because it just wasn't right, and apparently they can do that in match play.

"I feel really bad for him, and lucky break for me."

Another thing that caught the eye was the colourful knee-high socks of DeChambeau's caddie.

DeChambea now has Brian Zeigler looping for him full-time after the World No. 13 parted ways with Tim Tucker.