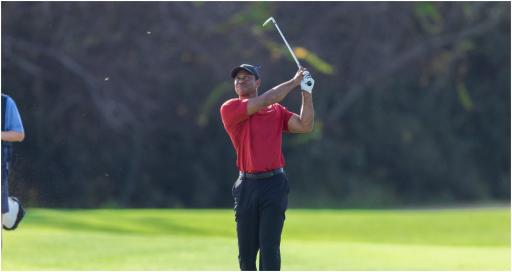 The irons and wedges Tiger Woods used through 2000 and into 2001 when he completed the "Tiger Slam" have gone up for auction.

Woods memorably lit up the golf world in that period when he won consecutively the U.S. Open, Open, PGA Championship and the Masters.

Although it was not in the same calender year, his accomplishment has been known as the Tiger Slam.

The Titleist 681-T irons and Vokey wedges (stamped with TIGER written on them) have gone up for auction for the first time since 2010.

The opening bid was a minimum of $25,000 but they are expected to fetch more than $1million.

The set includes a 2-iron through pitching wedge.

Golden Age Auctions is handling the listing. They have previously sold a 1934 Masters ticket for $600,000.

Woods' wear marks - smack bang in the middle of the irons - are visible throughout the set.

Woods was his most dominant in the year 2000. He won nine times (that included the year's final three majors).

In doing so, he became the first golfer since Bobby Jones to win four majors back-to-back.

How did they come up for Auction?

The seller is a man by the name of Todd Brock.

Mata formerly worked for Titleist as the VP of player promotions.

He delivered Woods a new set of Titleist prototype clubs in 2001 at the Buick Classic.

Woods reportedly gifted the Tiger Slam clubs to Mata, before he sold them to Brock.

The bidding for the clubs will conclude on Masters Saturday, 9 April.