PGA Tour commissioner Jay Monahan has been speaking about the crowd behaviour at TPC Scottsdale and says they will address the issue. 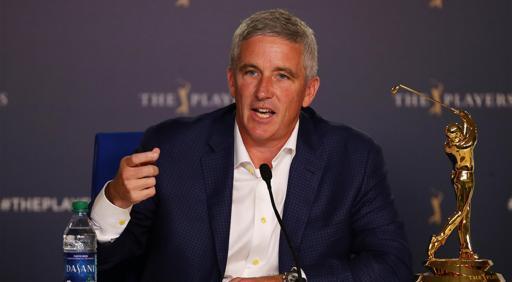 Speaking to the BBC, Monahan said that what happened will be addressed. The scenes at the 16th stadium hole divided golf fans.

We saw not one but two hole-in-ones over the course of that weekend which prompted some fans to throw beer cans and bottles on the green.

It took green staff several minutes to clear the green as players waited on the tee box to hit their shots.

Carlos Ortiz, who got an ace, was hit with a beer can. Sam Ryder also sent the crowd into ecstasy when he got an ace, too.

The WM Phoenix Open has developed a party atmosphere over the years. It has become one of the most entertaining parts of the season.

Tiger Woods memorably made an ace there and sent the crowd into a frenzy in 1997.

Now, the makeshift stands packed around the hole can fit more than 20,000 fans. Some golf fans love it, others hate it.

Harry Higgs was just one player who got into the spirit of things. Though he later admitted he wished he hadn't.

He drained a lengthy par putt and whipped off his shirt. Joel Dahmen followed suit.

Higgs said he immediately regretted what he did and was facing a possible fine over his antics.

He said he would donate some money to charity too.

Monahan told the BBC: "At the Phoenix Open we've created an atmosphere that is unmatched and unparalleled in our sport.

"Also it was in a period when people are coming out of their homes and experiencing sporting events at venues the way they used to after not being able to do so for so long.

"The reaction you saw was the stunning nature of a hole-in-one on that hole.

"But it's never acceptable to be throwing water and beer bottles - we saw it a few times that weekend - and it's going to be addressed."

Monahan said of Higgs and Dahmen: "Harry and Joel did get carried away but it's the atmosphere we've created.

"We've got to recognise that's something we helped to build and when you get situations that need to be addressed, they get addressed."

Monahan has not been afraid to address crowd issues in the past.

When the Brooks Koepka and Bryson DeChambeau "feud" was at its height last year, he said any fan shouting "Brooksy" could face being kicked out.

Next page: Fan waiting for Harry Higgs lifts up their shirt