Bryson DeChambeau as a teen: 14-year-old was always DESTINED for superstardom

Have you seen this clip of the enigmatic golfer talking about his career aspirations? 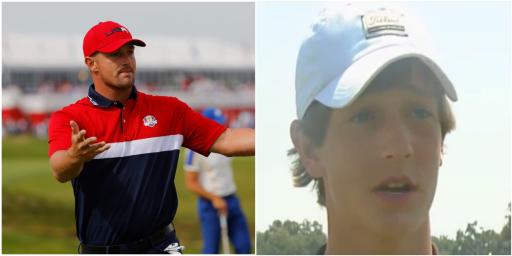 This is pretty cool, and who would have thought at the time this kid would grow up to be the superstar he is today.

Of course, his talent was undeniable but taking that talent and nurturing it is another thing.

To get to the PGA Tour, you simply have to work hard. Harder than you might ever dream of.

And that is what DeChambeau has done. He has grinded. Now he's an eight time winner on the PGA Tour.

Oh, and he's a U.S. Open champion and a Ryder Cup winner too.

Who knows how many titles he will end up with when he finally calls it a day.

The video emerged on the popular Instagram page Long Drivers.

Here, DeChambeau is 14 and he explains that he picked up the game when he was young then started competing in tournaments when he was eight.

"I enjoy having that reputation right now," he says of being the top ranked teenager in California.

In this period, DeChambeau maintains a very high grade point average of 4.0 (A+) and aspires to go to Stanford.

DeChambeau later attended Southern Methodist University and went on to have an impressive collegiate career.