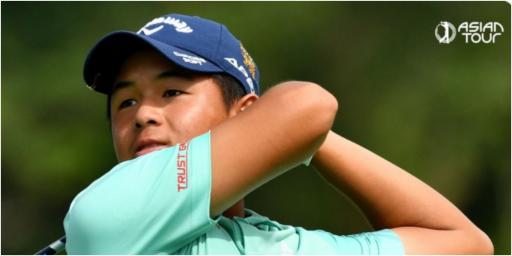 A 14-year-old golfer has made the cut at the Blue Canyon Phuket Championship on the Asian Tour.

In the first official event on that circuit in 20 months, Ratchanon Chantananuwat carded rounds of 71 and 72 at the Blue Canyon Country Club.

The teenager becomes the third youngest player ever to make the cut at the halfway stage on the Asian Tour.

Chantananuwat hit 29 of 36 greens and 23 of 28 fairways over two rounds and is currently 1-under par. The United States' John Catlin leads.

Ratchanon Chantananuwat makes his debut on the Asian Tour this week.

Achieved at a young age of 14 years and 268 days old, behind record-holder @jazzjanegolf and Kuang Yang.

Catlin has already won three times on the European Tour.

Before he made his debut, Chantananuwat had already competed in several events and was the low amateur at the Thailand Open.

He is 14 years and 268 days old. The current holder for the youngest ever player to play on this circuit is Jazz Janewattananond.

Janewattananond, 26, is a six-time champion of the Asian Tour.

He has had several close calls on the European Tour and is an extremely talented golfer.

His best finish in a major so far came at the 2019 PGA Championship where he finished in a tie for 14th.