The golf world will turn their attention to the once-feuding golf stars for the fifth edition of The Match later this month. 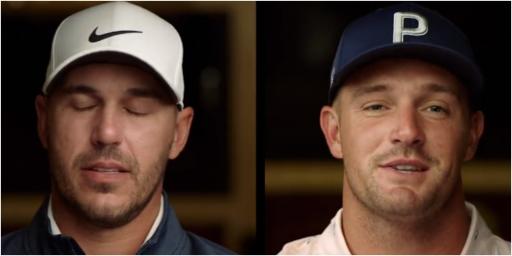 Bryson DeChambeau and Brooks Koepka have starred in a new advertisement teasing their forthcoming match in Las Vegas.

In the fifth edition of The Match, the pair will square off for the first time over 18 holes on 26 November.

Their "feud" emanated from when Koepka took issue with DeChambeau's slow play and then increasingly ramped up.

It appeared there was genuine bad blood between the pair of Ryder Cup winning team mates.

Most memorably, the height of their issues appeared to be when Koepka looked visibly annoyed during one interview.

DeChambeau walked behind him and muttered something to Koepka's dissatisfaction.

It sparked a meme that spread like wildfire all over the Internet and now Koepka sees the funny side of it.

They are of course using Koepka's famous expression to plug their match.

There is no doubt their social media bickering was no doubt fueled by the prospect of getting a payout from the PGA Tour.

Of course, Tiger Woods is said to have picked up the top prize of $8 million.

But of course DeChambeau and Koepka are also in line to get a huge chunk of change.

The advert is set to the famous song: "You're my best friend".

DeChambeau then chimes in with a grin: "Friendsgiving is going to be a little different this year."

RELATED: KOEPKA DIGGING DIRT AHEAD OF THE MATCH