Perhaps DeChambeau will also give basketball a try to see how it translates to his golf game... 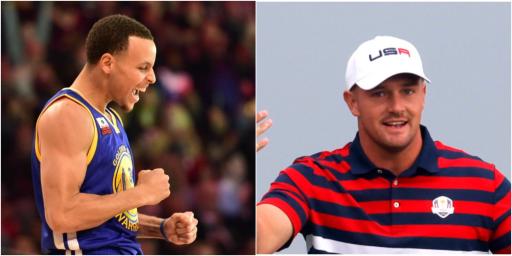 Curry was even filmed practicing his golf swing on the court before the Warriors defeated the New York Knicks 105-96 at Madison Square Garden.

The 33-year-old needed one three-point success on the night to equal the mark of 2,973 set by NBA legend Ray Allen.

As you can no doubt imagine, elite athletes mix in the same circles.

Bryson DeChambeau had this to say:

Congratulations @StephenCurry30 on an amazing achievement tonight! A true legend in his craft.

Curry is a massive golfer, too, and is always playing in the pro-ams in the United States.

He most recently starred as the guinea pig as Phil Mickelson hit one of his famous flop shots over his head.

It is certainly a trick shot not for the feint of heart.

Curry beat his chest as he took the all-time record, standing alone at the top of his sport.

Golf always on the mind.

Curry sat on the bench after breaking the record, taking the moment in for himself before hugging previous holder Allen.

This is no doubt a story he will enjoy telling when he's old and grey on the fairways.

Curry has previously played in professional events, and posted an impressive 71 at the 2018 Ellie Mae Classic.