"He definitely had a few gin and tonics, I'll tell you that" 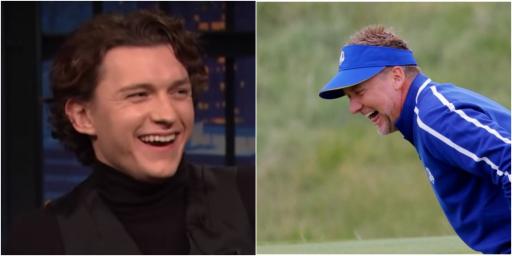 Hollywood actor Tom Holland is known for his love of golf.

When he's not playing Spiderman he likes to spend a lot of time on the fairways. We saw just how good his swing is when he played at the BMW PGA Championship Pro-Am at Wentworth club earlier in the year.

The actor even won the longest drive when he ripped one straight down the middle. His tee shot went 310 yards. Holland came to public attention when he played Billy Elliot as a kid.

Now 25 years old, he recently revealed why he loves golf so much and that he is addicted to it. He even got to go and watch the Masters.

"Playing golf is what I do. I'm addicted to golf and had I not been addicted to golf, I would have had a very different career. It's a nice way to disconnect from what's going on around you. I turn my phone off and I just enjoy being outdoors with my friends, my brothers and my dad."

"And golf is also incredibly humbling. Over the last few years, I've been very lucky that my career has taken twists and turns, but all the kind of twists and turns that I could only have dreamed of. And very often, I'll go out and play golf to celebrate, and it will very, very quickly humble me by destroying me."

Holland recently appeared on 'Late Night with Seth Meyers' where he told of a hilarious story involving none other than Ryder Cup legend Ian Poulter. Holland was allowed to attend the Masters with the lucky 3,000 other patrons due to COVID-19 restrictions.

"We're on the 10th tee watching Tony Finau tee off, and Ian Poulter just rocks up, gin and tonic in hand, and honestly it was the highlight of my year … Just getting all the juicy golf goss … he definitely had a few gin and tonics, I'll tell you that."