Bryson DeChambeau PRACTISES HARD ahead of The Match with Brooks Koepka

Bryson DeChambeau has been grinding out on the course at The Wynn Golf Club in Las Vegas as he prepares for his showdown with Brooks Koepka. 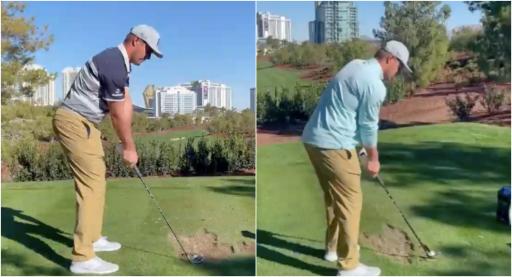 Bryson DeChambeau has been practising at The Wynn Golf Club, the venue of his long-awaited showdown with verbal sparring partner Brooks Koepka.

Yesterday, DeChambeau was soaking in the sights and the sounds of Las Vegas as he was videoed striping some iron shots down the fairway in Nevada on his Instagram story.

His Instagram story footage also shows that he has taken some time to work on the rest of his game as well as his driving, which he strenuously works on at home and on holiday.

In his second to last post on his Instagram account, the former US Open champion joked that he practised his short game ahead of The Match, linking to his fixation with bombing drives at the practice ground.

Also during his preparation for tonight's match-up, DeChambeau hit balls from the top of a Las Vegas casino at a target with Koepka's face on it. One drive travelled an amazing 521 yards.

The eight-time PGA Tour winner, the same tally as Koepka, is not taking this match lightly and he will be hoping to emerge victorious after 12 holes.

Six-time major champion Phil Mickelson and NBA legend Charles Barkley will take up commentary duties, so it is set to be an entertaining affair all around.

This will be the fifth edition of The Match but the first one that Phil Mickelson won't be playing in. He and the NFL's Tom Brady were beaten by DeChambeau and the NFL's Aaron Rodgers in the fourth fixture.

RELATED: PGA TOUR PRO COMES TO THE DEFENCE OF GOLFER WITH A UNIQUE SWING AND DRESS SENSE

Ahead of The Match, Koepka gave golf fans a sneak peek of his golf cart which he will use to navigate the course. It features his trademark logo as well as other sponsors.

In a video chat with Mickelson, Koepka declared that he wants to end the match after seven holes. With Koepka's steely determination and DeChambeau's power play, we are set for some fireworks later today.

NEXT PAGE: BROOKS KOEPKA SHARES SNEAK PEEK OF HIS BALLER GOLF CART HE'LL USE IN THE MATCH