Koepka is the underdog for The Match, but he'll be trash talking Bryson DeChambeau from this golf cart... 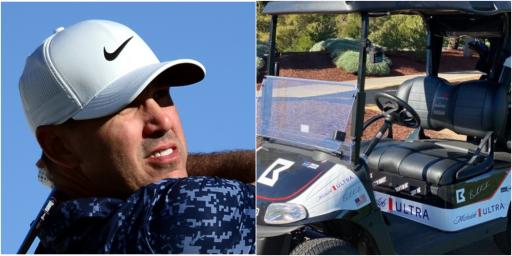 Brooks Koepka will be rolling down the fairways in style in Las Vegas at The Match.

On his Instagram stories the 31-year-old shared a sneak peek of the golf cart he'll be using.

It's got his trademark logo on the front and looks pretty cool, decked out in red and black colouring.

It's expected he'll be trash talking Bryson DeChambeau the whole way around the Wynn Golf Club in Las Vegas.

The pair are playing against each other over 12 holes in a matchplay format.

Koepka is now no longer the hottest equipment free agent.

He'll be playing The Match tonight with Srixon equipment after singing a multi-year deal this week.

For the last five years he has played without an equipment deal.

Koepka will now use a Srixon ZX5 driver set at 9.5 degrees with a 44.5 inch Mitsubishi Diamana D+ 70 TX shaft.

Oh, and he'll have a shiny new Srixon staff bag.

DeChambeau will be playing the new Bridgestone TOUR B golf ball in Las Vegas.

The betting favourite to win The Match is Bryson DeChambeau.