Bryson DeChambeau may have shot a round of level-par, but he went on a spectacular route to this score on Thursday at Liberty National. 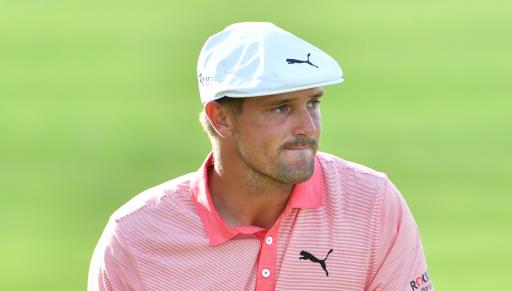 Bryson DeChambeau opened his Northern Trust campaign with a level-par 71, but it was a round that we have never seen the like of on the PGA Tour.

The big-hitting American made nine birdies, five bogeys, two double-bogeys and just two pars on a day that was full of both the best and worst of his game.

DeChambeau started poorly at Liberty National with two bogeys on his opening two holes, but when he walked off the green at the 6th hole, he was back on track at 1-under-par.

He then made a bogey at the 7th hole, but reacted with his fourth birdie of the day at the 8th hole. The 2020 US Open champion then made two double-bogeys in his next four holes.

After a bogey-bogey start for Bryson DeChambeau ...

A bounce-back birdie at No 3. pic.twitter.com/WLADTEpmsP

In his final six holes, DeChambeau completed his round with four birdies and two bogeys to finish on level-par. The employees who work on the tournament scoreboard will have breathed a sigh of relief when DeChambeau finally walked off the 18th hole.

The 27-year-old lies eight shots behind the leaders Jon Rahm and Justin Thomas, who shot scintillating scores of 63 to hold a three-shot lead over Harold Varner III on 5-under-par.

He is currently ranked 7th in the FedEx Cup standings so a good week for DeChambeau could not only confirm his place at the BMW Championship, but also the Tour Championship.