Cam Davis shot a solid score of 2-under-par at Liberty National on Thursday, but this was with the help of an extremely lucky bounce. 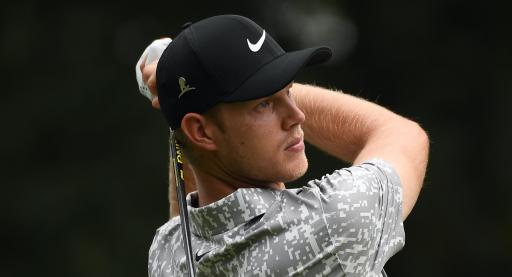 Cam Davis was looking very nervous as his drive on the short par-4 16th hole at Liberty National began to fade away from the green towards a water hazard.

The 16th hole is a 283-yard par-4 which is driveable for every player in the 125-man field this week and Davis felt that he would go for the green on Thursday.

The Australian took out his driver and took aim at the green, but his ball began to slice in the air and it looked destined for the water to the right of the green.

It is not yet clear what happened, but Davis' ball bounced off the greenside rocks and rebounded off something, whether it was a building or a tree, to finish about 10 feet from the pin.

Eagle on the rocks.@CamDavisGolf making the most of a WILD bounce. pic.twitter.com/euSnuNYbBl

It is one of the luckiest breaks that we have ever seen on the PGA Tour and Davis took full advantage of his lucky break and rolled in his putt for an eagle.

The 26-year-old walked on to the 16th tee box having just made back-to-back bogeys, so the eagle was a welcome addition to his scorecard and helped him finish on 2-under-par for the tournament.

Earlier in the season, Davis won the Rocket Mortgage Classic, which was his first win on the PGA Tour, and this helped him rise to number 36 in the FedEx Cup standings.

After his first round at Liberty National, Davis is currently projected to rise four places to 32nd in the standings, which puts him in good shape to progress through the FedEx Cup Playoffs.