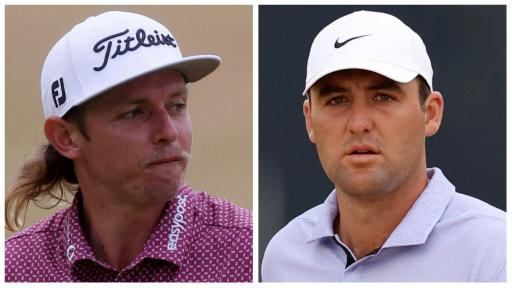 Golf fans have been reacting to seeing World No.1 Scottie Scheffler walk right in front of World No.2 Cameron Smith while he was reading a putt on the par-4 12th during the opening round of the FedEx St Jude Championship.

To add context to the clip below, it has emerged in the last 48 hours from Telegraph Sport that Cameron Smith has already agreed to move to LIV Golf after the FedEx Cup Playoffs at the end of the month.

However, Open champion Smith has declined to comment on such a report.

Related: Why have the PGA Tour not suspended Cameron Smith from the FedEx Cup Playoffs?

Scheffler, who is very much committed to the PGA Tour, has made it no secret his dislike of the LIV Golf Invitational Series, and he even spoke of his frustration at the PGA Tour being sued by a number of LIV Golf players earlier this week.

So onto the video clip in question, and we join Scheffler tapping in for bogey on the 12th hole, his third hole of the round.

He then walks straight in front of Smith who is low to the ground reading the line of his birdie putt.

Smith then immediately looks up at Scheffler in a state of shock.

In this instance, it would have been much better golf etiquette to walk behind Smith rather than over his through line on the green.

There was also no apology.

Has Scheffler got an issue with Smith?!

Scottie Scheffler making it known what he thinks of Cam Smith’s move to LIV. pic.twitter.com/lRyoJDCzTL

Scheffler was 4-over thru 5 holes but he made three birdies thereafter to finish 1-over par for the round, while Smith carded a 3-under 67.

Are you kidding me?!? What is wrong with Scheffler? Golf is supposed to be a game of respect and Scheffler showing his level of class as he implodes and Cam Smith excels! Are #LIVGolf players the only ones with class anymore? https://t.co/F0RZg6VNRk

World #1 showing World #2 what he thinks about his move to LIV. G’bye Mate! @NUCLRGOLF @PGATOUR pic.twitter.com/Bqs0jNg76K

Scheffler will be wishing he has LIV money in 5 years. Flash in the pan