Cameron Smith has reportedly already agreed to move to LIV Golf, so why is he still in the FedEx Cup Playoffs on the PGA Tour? 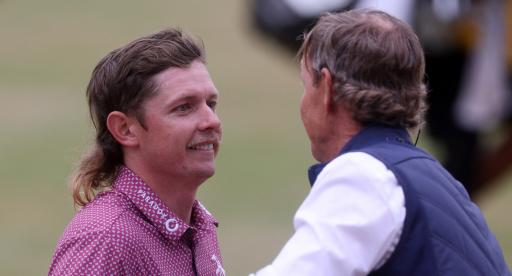 To all intents and purposes, Cameron Smith is a LIV Golf player. It's just not been made official yet.

A report in the Telegraph Sport has revealed the figures and plan ahead, while Smith himself even went as far to say he is "ready to cop some heat" during an interview with Sky Sports Golf this week.

Fresh off his three-week break back home in Australia after etching his name on the famous Claret Jug at the 150th Open Championship at St Andrews, the 28-year-old now lines up in the FedEx Cup Playoffs before apparently heading over to Boston to play in his first LIV Golf event.

Smith, now the World No.2, won the first event of the year on the PGA Tour at the Tournament of Champions. He then added further wins in two of the biggest tournaments of the season at The Players Championship and The Open.

At No.2 in the FedEx Cup standings entering this week's first FedEx Cup Playoffs event at the FedEx St Jude Championship, and there is every reason to believe Smith could win the FedEx Cup at the end of this month and pick up a bonus cheque for $18 million in the process.

But if Smith is on his way to LIV Golf, and who knows potentially already even signed on the dotted line with Greg Norman and his Saudi chums, why has the PGA Tour not acted and kicked him off the Tour, Doug?

Well, fortunately for Smith and anyone else thinking of breaking away from the PGA Tour to join LIV Golf anytime soon, the PGA Tour commissioner Jay Monahan cannot ban anyone until they have actually hit their first shot in a LIV Golf competition.

This is exactly what happened at LIV Golf Hertfordshire London in June. Monahan dropped a message into everyone's inbox informing them of their suspensions within minutes of the shotgun firing at Centurion Club.

The story is no different ahead of Boston.

Now you might be thinking the recent antitrust lawsuit filed by 11 LIV Golf players against the PGA Tour last week revealed that Phil Mickelson was suspended back in March, three months before the LIV Golf Tour even started... so what's the difference?

But the issue with Mickelson is that he was banned as a result of poor conduct. The PGA Tour found out that Mickelson had been recruiting players from the PGA Tour to join him over on LIV Golf, and that was against the regulations in their player handbook.

In June, Mickelson applied to be reinstated, but it was swiftly rejected by the PGA Tour. This time it was because he had teed it up in the first LIV Golf event. At that point, Mickelson was not able to apply for reinstatement until 31 March 2024.

Of course if the PGA Tour could find some way to officially confirm Smith has signed a contract with LIV Golf, and he had been working hard to recruit his good pal Marc Leishman to also join him for example, then yes, he would likely get banned during the FedEx Cup Playoffs.

But the PGA Tour, at least to our knowledge, does not have any information available or any concrete evidence with which to issue a ban. They cannot just dish out a suspension based on something that is not yet 100%.

You could also argue the PGA Tour will not want to make Smith's imminent move to LIV Golf a bigger talking point than the FedEx Cup Playoffs itself... but it's probably a little too late for that now.

The latest transfer talk will certainly be a huge blow to Monahan and the rest of those on the PGA Tour as Smith will become LIV Golf's biggest signing to date, at least in terms of current form.

"I'm ready to cop some heat"

World No. 2 Cameron Smith drops biggest hint yet that he will be joining LIV Golf pic.twitter.com/1xKetYDc1B

But Smith knows exactly what he is doing here. He's played a very clever waiting game in fact since St Andrews, when let's face it, we could all tell he was on his way.

Smith is playing the best golf of his life right now and with $18 million on the line in three weeks' time, he certainly wants to hang around to see if he can add that money to his juicy LIV Golf signing-on fee that is believed to be north of $100 million.

That should probably just about cover all of his new fishing equipment.

Smith has won The Players and he's won The Open in 2022. Can he possibly win the PGA Tour's greatest prize of them all, too?

No matter what we all think of Smith's decision to switch to LIV Golf, a victory at East Lake at the end of the month would certainly be some way to drop the mic.