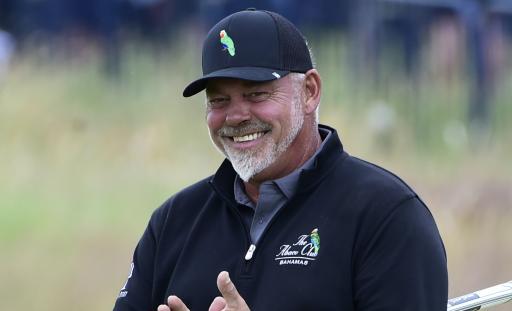 Darren Clarke overcame KJ Choi and Steve Flesch in a playoff to win the Sanford International on the PGA Tour Champions.

The Northern Irishman began the third and final round at Minnehaha Country Club four shots behind the leader Choi on 7-under-par, but a solid 5-under-par 65 put him at the top of the leaderboard.

While the South Korean could only manage a round of 69, the American Flesch shot a 66 of his own to finish level with his opponents on 12-under-par.

Flesch, who won four times on the PGA Tour, dropped out at the first playoff hole by making a bogey on the 18th, which just left Clarke and Choi to battle it out.

RELATED: TIGER WOODS TO GIVE MOTIVATIONAL SPEECH FOR TEAM USA AT THE RYDER CUP

Going back down the 18th hole once more, the 2011 Open champion made a fantastic birdie to beat Choi and to lift the third trophy of his PGA Tour Champions career.

"It’s nice to get back in the winner’s circle again. In the playoff, you never know what’s going to happen, anybody can make birdie and luckily it was my day today," said Clarke.

"I’ve really enjoyed my time here in Sioux Falls. The fans have been brilliant. I've had maybe a little beverage with one or two of them in the past, so it’s been nice to have that atmosphere and that support. It’s always wonderful."

Back in November 2020, the 53-year-old won the TimberTech Championship and then on his next appearance on the PGA Tour Champions, he won the Mitsubishi Electric Championship at Hualalai in January.

Clarke also went close at The Senior Open Championship at Sunningdale earlier in the year, but he could only manage a third-place finish.

NEXT PAGE: WATCH: THE GREATEST EUROPEAN SONG OF ALL TIME AT A RYDER CUP! THIS WAS EPIC!