Max Homa carded a 65 in the first round of the Fortinet Championship to sit two shots behind Justin Lower who made an incredible start in Napa. 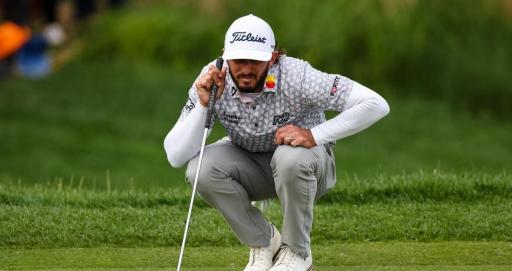 Max Homa is set to put up a staunch defence of his title at the Fortinet Championship after carding an opening round 65 on Thursday.

Homa, who finished tied fifth at the Tour Championship in August, scored seven birdies and avoided bogeys to sit on 7-under-par after day one at Silverado Country Club in California.

This was the same score that the 31-year-old shot in the final two rounds of last year's event. He finished one shot ahead of Maverick McNealy to win his third PGA Tour title.

He also went on to win the Wells Fargo Championship for the second time. He has built a large fanbase on the Tour, despite hearing some strange chants from the fans, and he has become one of the most popular players in America.

Homa was bettered by one man on Thursday and that was Justin Lower. The man who secured his first PGA Tour card in 2021 made nine birdies and no bogeys to shoot his lowest-ever score on the Tour.

This is NOT a replay @JustinLower_1 chips in again two holes later from a nearly identical position https://t.co/oYwiMOWU0e pic.twitter.com/rYVHw0jw8A

"I’ll take it. I birdied half the holes, so that’s always a good start, I guess. I’m honestly just happy to be in the position I am having I guess, full status," Lower said.

Another player who made a solid start was Rickie Fowler, who has recently split with his coach John Tillery and returned to Butch Harmon.

Now with veteran Tour caddie Ricky Romano on the bag too, Fowler's changes paid dividends in Napa on Thursday. He carded a bogey-free 67 to sit four shots behind Lower and in a good position to contend for his sixth career title.

"I always like it when there’s a bogey-free round in there. For the most part, there wasn’t an issue today other than having to make a 15-footer when I hit it into the bunker. Other than that, it was a fairly simple day," Fowler said.

Sahith Theegala and Emiliano Grillo also shot 5-under-par, while Tour veteran Matt Kuchar is one shot further back. Play was suspended due to darkness with some players yet to complete their first round.