Max Homa shot his career-low score in the second round of the Tour Championship and he felt the love from the crowd despite hearing some weird comments. 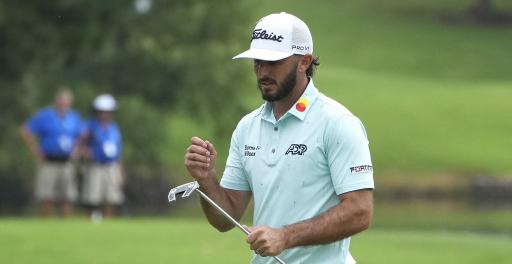 Max Homa claimed he could be the next Tiger Woods if popularity was decided by "being yelled at in the weirdest ways possible" as he experienced at the Tour Championship.

Homa shot his best ever score on the PGA Tour on Friday at the Tour Championship, making six birdies and an eagle on his way to a 62 to reach tied eighth in the season-ending PGA Tour leaderboard.

He may be 10 shots behind World No.1 Scottie Scheffler, who is currently two shots clear of Xander Schauffele on 19-under-par, but Homa was happy with the reception he has received from the crowd at East Lake.

Since winning his fourth PGA Tour title at the Wells Fargo Championship in May, Homa has developed a large and passionate fanbase. Although he hears some peculiar comments toward him on the course, the 31-year-old intends to grow the game through his popularity.

After his record-breaking round which produced the lowest score at East Lake for 15 years, Homa spoke of his popularity and the huge changes that have been made to the PGA Tour schedule in 2023 involving 20 no-cut events, $20 million purses and the PIP.

"I trusted that I am good at golf."

"The Tour is doing their best to be creative and provide a different stream of income to the 20 guys now who are driving the revenue for the Tour. Part of it's silly in my opinion, but also part of it's not," Homa said in Atlanta.

"It makes a ton of sense if someone is out here and there's the reason - I always use this example. I tied Tiger Woods two years ago, three years ago at Torrey Pines, and I realize we got paid the exact same amount of money and I provided zero dollars to that event and he provided I can't even come up with a number. So you would think, man, Tiger should get a bit more.

"So I like what they're doing with that. It's a tricky thing. It's ambiguous, but the Tour is just trying to make the Tour better and benefit the guys who are helping drive everything for the rest of us. So I think that's good.

"I would win this PIP if it was about who gets yelled at in the weirdest ways possible. I could be Tiger, I think. I don't know, people seem more and more aware. I am aware that I'm getting a bit more popular, but I don't know.

"It would be cool for the money if I could be in the top 20, but I have always wanted to grow the game of golf whether I got paid for it or not. I love this game. I would love more kids to get involved. I'd like it to be more diversified.

"I think the game is in a good place, and I hope to be a part of just making it continue to go that way. I'm just going to try to use my PGA Tour status as kind of the catalyst for that."

The Player Impact Program is being expanded to include the top 20 players who supposedly "move the needle" on the Tour in 2023. This could give Homa the chance to take a chunk of the new $100 million prize purse which has been increased to secure the futures of the Tour's best players.

Homa will be staying put as far as the LIV Golf Tour is concerned. He is playing the best golf of his career and the majority of players in the peak have decided against a switch to the Saudi-backed series.