Kyle Wilshire, who Monday Q'd in to the AT&T Byron Nelson on the PGA Tour, reveals the tough times that have given him this opportunity. 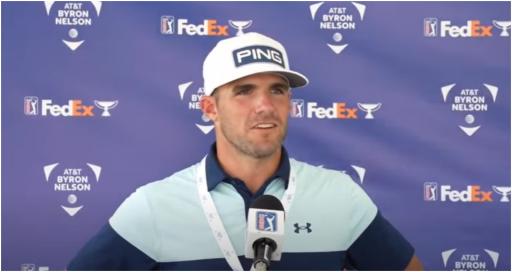 Kyle Wilshire is potentially a name you might not be familiar with on the PGA Tour.

He's a Monday qualifier into the AT&T Byron Nelson and fired a blistering opening round of 7-under 65 at TPC Craig Ranch.

Wilshire found himself five strokes behind the early pace setter, Colombia's Sebastian Munoz, who made PGA Tour history by carding the second 60 of the season.

He is only making his third ever PGA Tour start after bouncing around the mini tours and Monday qualifiers since as far back as 2014 when he turned professional.

And he conceded that when he previously played on the Korn Ferry Tour he "probably" didn't do the best job of taking care of himself.

"Not that I didn't work hard. It's just I played 14 weeks in a row and my body was just toast," he told the media.

Now things are a little bit different. His route to the PGA Tour this week has seen him work late nights during the pandemic and grinding hard at his game during the day to keep the dream alive.

"So I had a job in 2020 in the evening times, and I just always kind of told myself that you get out what you put in, and when I was doing my job it wasn't fun, but I made the most of it and I kind of turned it into an opportunity to get better and just tried to have the right mindset.

"I think that's what I have done now. Rest of my life is in order and I'm in a good spot and I'm just trying to take the advantage of the opportunities I have."

So what was his evening job?

Wilshire said: "I was actually a trash porter. My girlfriend's apartment complex was advertising a place for some help in the evening times, and [during] COVID there was nothing really going on other than a small mini tour in Florida.

"I didn't really want to be in an office job. I wanted to continue to work on my game, and this was in the evening times from 6pm sometimes to 11pm at night.

"It wasn't the most glamourous job, but I wouldn't say it humbled me, but allowed me to work on my game.

"I did it for four months. It kept me in good shape and I just think it made me a little tougher. Made me just appreciate the opportunity to play.

"And then now when you're out here it's just not taking things for granted. When you play on the PGA Tour, you're driving a brand new Cadillac this week.

"You're eating the best food, it's the best facilities. You got club companies taking care of you. I've never had that before.

"I just always hoped I'd get to this level and believed that I could. The journey has been a little bit different than a lot of people, but I'm blessed to be here."

Wilshire still doesn't have status on any tour.

"I wanted to play tournament golf this year, whatever level that was, so I kind of sacrificed those Q schools. Played a mini tour last week and finished second up in Oklahoma.

"[I] just want to give myself a chance to come out here and play a lot of Monday qualifiers.

"Being through the pre's is huge, so doing that was kind of my mentality. [I] got through this week and I'm just trying to roll it, you know, see what happens.

"The opportunity is right in front of me, so I'm excited."