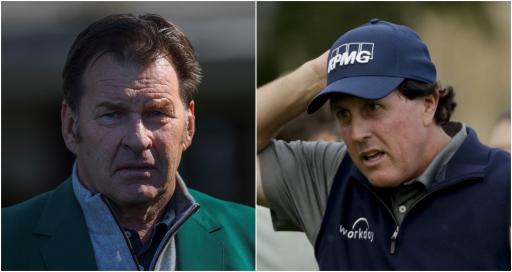 Jim Nantz barely mentioned Phil Mickelson during the coverage of the 86th Masters in April.

Maybe he was told keep Mickelson references to a minimum. Maybe he wasn't.

That was despite reports that Lefty was told to keep away. Instead, it was via text message that Mickelson informed Ridley he was going to be absent.

Mickelson is in the final field for the forthcoming PGA Championship at Southern Hills, although he hasn't officially confirmed he will play.

Lefty's social media account was back in use earlier this week for the first time since he stepped away from the golf world in early February following his controversial comments.

Who knows what type of Mickelson will return when he finally does decide to step back into the spotlight.

Nantz, the voice of CBS sports, was asked about Mickelson during a recent conference call with the media.

Golfweek quoted Nantz saying: "Sometimes we get caught up in the cyclone of the story and we think it's forever. It won't be forever. He'll be back, he'll play, he's got a ton of fans out there.

"This is a forgiving nation and there's a million examples of people finding their way back to being on top again, and I fully expect he will one day."

Sir Nick Faldo was also on the call and was quoted by the publication as saying of Mickelson: "I think he would love to play. I personally think it's an unbelievable mental challenge to come play after what he's put himself through, simple as that.

"I don't think it's as easy as just getting back on the bike and arriving at a golf tournament and going and playing.

"The attention is going to be monumental. I don't know whether he will be mentally ready for that."