Dustin Johnson does OUTRAGEOUS backflip off a boat with Paulina Gretzky

Johnson enjoys some down time with family and friends ahead of the upcoming US PGA Championship... 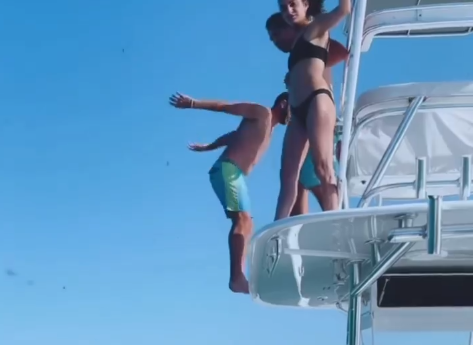 Dustin Johnson might be the world's best golfer right now, but he's also a bit of pro when it comes to diving - at least judging by fiancee Paulina Gretzky's latest social media post.

Johnson is currently enjoying some time at home with family and friends instead of competing at this week's Wells Fargo Championship on the PGA Tour.

While Johnson will no doubt be hitting some balls later this week as he looks to improve a slide in performances lately ahead of the upcoming US PGA Championship at Kiawah Island, the World No.1 has been keen to show off some very different skills on social media.

Gretzky posted on her Instagram Story this week a video of Johnson doing an outrageous backflip off a boat. His brother and caddie Austin took the safer route by just jumping into the sea.

The Long Drivers Instagram account posted: "Could we see DJ at the 2021 Olympic Games in 10m Diving?"

Unfortunately, DJ has already turned his nose away at competing in the Olympics this season - in his words as a result of the busy upcoming PGA Tour and major schedule.

News also emerged this week that the two-time major champion has been offered a whopping $50 million contract to take part in a new Golf Super League, with a number of other high-profile players such as Brooks Koepka, Bryson DeChambeau, Phil Mickelson and Justin Rose - READ HERE