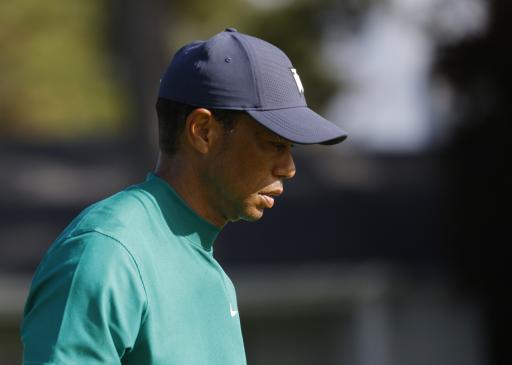 A forensic car accident expert has told USA TODAY Sports he believes there is strong evidence to suggest Tiger Woods "fell asleep behind the wheel" as a result of his car crash in Los Angeles last Tuesday morning.

Woods, 45, suffered "comminuted open fractures" to both the upper and lower portions of his tibia and fibula in his right leg, as well as damage to the ankle bones and trauma to the muscle and soft tissue of the leg, following a single vehicle roll-over traffic collision.

Los Angeles County Sheriff Alex Villanueva last week confirmed Woods will unlikely face any criminal charges and that it was being treated as "an accident", but an investigation into how the crash happened remains ongoing.

However, available evidence from the car crash so far has led a forensic car accident expert to suspect Woods fell asleep at the wheel.

"To me, this is like a classic case of falling asleep behind the wheel, because the road curves and his vehicle goes straight," Jonathan Cherney, a consultant who provides car accident analysis as an expert witness in court cases, told USA TODAY Sports.

RELATED: WOODS WAS "AGITATED AND IMPATIENT" AND "TOOK OFF FAST" FROM HIS HOTEL MOMENTS BEFORE CRASH

Cherney, a former police detective, is said to have examined the crash site in person for himself in recent days to gain a better understanding as to how Woods possibly caused his vehicle to come off the road.

"It’s a drift off the road, almost like he was either unconscious, suffering from a medical episode or fell asleep and didn’t wake up until he was off the road and that’s where the brake application came in," added Cherney.

All three forensic experts also believe Woods did not lose control of his vehicle as a result of excessive speed, simply because his SUV appeared to keep going straight ahead instead of staying on the road as it curved to the right.

They reached the conclusion Woods applied the brake late into the collision sequence.

Travelling north near Los Angeles last Tuesday morning, Woods' vehicle veered across the median into the southbound lanes, went off the road, struck a tree and rolled over before sustaining major frontal damage.

Felix Lee, an accident reconstruction expert who is part of the Expert Institute, said: "My feeling is that speed wasn’t that much of an issue. It was just some kind of inattention that caused the curb strike."

Woods' vehicle is said to have gone about 400 feet before stopping, and Cherney does not believe there is any evidence of "any steering input" that would indicate he tried to avoid the emergency.

Rami Hashish, principal at the National Biomechanics Institute, which analyses the cause of accidents, echoed Cherney's assessment.

"It was suggesting he wasn’t paying attention at all," said Hashish, who admits Woods is fortunate to still be alive.

He added: "You can walk away with a broken leg from 45 to 50 mph. If you’re hitting 60, 65 and you’re hitting a stationary object, your likelihood of death increases exponentially.

"If he was going 80 mph, then he wouldn’t be having an open fracture in this leg. He would be dead."

NEXT PAGE: TIGER WOODS TELLS INSIDER - "IT CANNOT END LIKE THIS"