Is Jordan Spieth finally about to drop his pre-shot routine?

Jordan Spieth ditched his pre-shot routine over a few shots at the Charles Schwab Challenge and it peaked golf fans' interest. 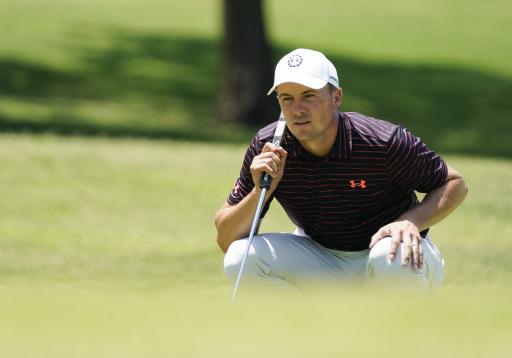 Jordan Spieth decided to drop his interesting pre-shot routine that has confused golf fans and analysts this season over a few shots during the third round of the Charles Schwab Challenge.

Related: What we can learn from Spieth's pre-shot routine

During the first two rounds of play at Colonial Country Club, Spieth could be seen getting ready to strike golf balls using that memorable "over the top" move.

It's something that he has been working on for quite some time. It has been reported before that Spieth is trying to eliminate hooks and pushes on the golf course.

But during the third round yesterday Spieth adopted a different approach. Over a few shots - not all of them - Spieth elminated it completely and stepped into the shot relatively quickly.

Is it a sign that things are starting to feel more comfortable for Spieth? Has his caddie Michael Greller had a word? As ever with Spieth, he has golf fans' attention.

Watching Spieth this season on the PGA Tour has been interesting. There have been moments of vintage Spieth and shots that would be more at home on your local municipal course.

Still, Spieth has persisted and that yielded his 13th PGA Tour victory at RBC Heritage at Harbour Town Golf Links.

That followed a missed cut at the Masters for the first time in his career and he also looked a little out of sorts at the US PGA.

Advanced PGA member Duncan Woolger previously told GolfMagic: "Jordan, historically, can get his path, the direction of the clubhead at impact, too far to the right.

"This leads to too much reliance on timing through impact."

He added: "In my opinion, Jordan is rehearsing trying to get the club 'unstuck' by rehearsing an 'over the top' move to neutralise his path."

Just this week Spieth said that he felt like he was getting closer. He suggested that his next run of form could be more exciting than anything we have ever seen before.

"I believe in that. I start to see that, and more importantly I start to feel that through shots," he told the media.

Still, even though Spieth ditched that pre-shot routine over a few shots golf fans seemingly thought it was hilarious: