"I think she forgot she was holding a baby". Golf fans react as Jordan Spieth's excited wife Annie runs onto the 18th green with baby Sammy. 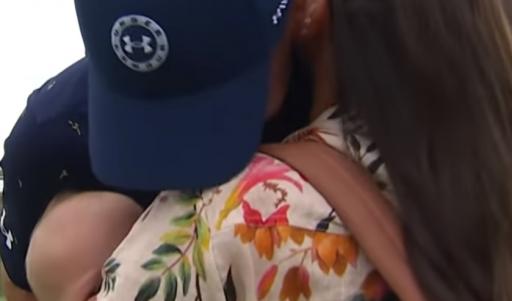 Jordan Spieth is back in the winner's circle on the PGA Tour following playoff victory over Patrick Cantlay at the RBC Heritage - and his wife Annie was understandably very excited about it all.

Perhaps a little too excited, at least judging by the comments in the PGA Tour Instagram thread to a video of her rushing onto the 18th green with baby Sammy in her hands.

Taking a closer look in the comments to PGA Tour's video and it's fair to say a large number of golf fans were left in shock at the way Annie was running onto the green bouncing up and down with little five-month-old Sammy.

There was also a flurry of comments on Barstool Sports' post.

We'll let you pass your own judgement in the video below:

Ran with that baby like a football!!! No wonder it’s crying. pic.twitter.com/nzm1rybKVr

Here's how a number of golf fans reacted:

"Easy with the baby girl, I know you're excited but WTF."

"Someone help that poor baby."

"I think she forgot she was holding a baby."

"Annie ran out there like she was carrying a football."

"Did anyone else see the baby bouncing while she ran out to Jordan."

Related: Who is Jordan Spieth's wife?

The victory for Spieth marked his first since the 2021 Texas Open and his first ever as a father.

They both met while at high school in Texas.

Spieth went to University of Texas at Austin, while Annie went to Texas Tech and majored in business.