Harry Higgs' caddie: "Is there any way this doesn't go in?"

Harry Higgs drained a birdie from 22ft at the 16th at the WM Phoenix Open. His caddie had no doubt where the ball was going. 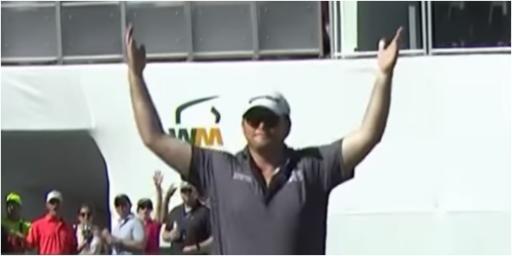 If there was one man you would bet on getting a birdie at the 16th hole at the WM Phoenix Open then it would be Harry Higgs.

Higgs, ever the showman, has become a crowd favourite on the PGA Tour ever since his debut a few years ago.

There is no doubt over the next few years you'll hear more about him. The boy is talented. And good-humoured, it seems.

His debut major performance at the 2021 PGA Championship at Kiawah Island saw him earn a spot at this year's Masters.

The 30-year-old was on hand to entertain the crowd during his first round. His tee shot left him approximately 22 feet for birdie.

That drew a fee boos, of course. The crowd are notoriously hard to please. And loud.

He had set himself up perfectly with a birdie at the 15th before entering the dragon's lair.

"It's always nice to get a birdie before you go to 16," Higgs told reporters after his first round.

Higgs gave us a wonderful celebration that included him lifting his arms up in the air before the ball even dropped. Nicely done, Harry.

"Funny enough, I hit a good shot and I had that same putt to the same pin, it would have been two years ago. And I'm marking the ball and my brother goes, 'Is there any way that this doesn't go in the hole?'

"And I just turned to him and I was like, 'no, we've seen this before'. I didn't play enough break two years ago. And fortunately the thing went in the hole.

"And then I hit a really, really, the best shot I hit today was the pitch shot on 17, like a high, cut spinner that has to land on about the size of a coffee table or else it's going to go in the water.

"So, yeah, it was nice to execute some shots with a bunch of people around and send them into a fervor for a little bit."