Xander Schauffele got an unfortunate break during the first round in Phoenix on the PGA Tour, but he saw the funny side of it. 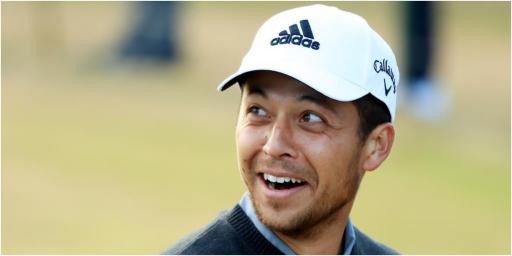 Xander Schauffele got into a tussle with some cacti during the first round of the WM Phoenix Open.

The Olympic champion eventually battled his way to a first round of 4-under 67 at TPC Scottsdale.

Schauffele's week already got off to an unfortunate start after his caddie tested positive for COVID-19. One of his buddies flew in for carrying duties.

"Got off to a good start for this tournament, so I got to test tomorrow morning and hope that I don't end up like Jon Rahm at the Memorial," he told reporters after his first round.

He was referring, of course, to the fact Rahm had to withdraw from Muirfield Village a year ago when holding a six-shot lead through 54 holes.

Schauffele looked in fine form. Brooks Koepka too, has flown out of the gates. But Schauffele's front nine briefly threatened to derail.

At the sixth hole, his tee shot came to rest up near the cacti. It left him with an awkward stance. So instead of asking his caddie to risk getting jabbed with thorns, he opted to move it himself.

"Seemed like a good idea at the time," Schauffele said to the crown watching. He ultimately managed to save par.

"Yeah, I figured at the time smart to sort of move a loose impediment. It was an old cholla or whatever out here. So I grabbed it not really looking at the other side and I kind of tossed and I had six or seven little thorns sticking in my hand, my finger. So kind of a rookie for not native to this area and not native to grabbing cacti, so I'll have to fix that mistake."

Asked how his finger is feeling now, he said:

"I was stepping on this piece and it felt loose, so I went to go have a look with my right hand, and some people in the crowd are like, 'He's from San Diego'. So they're right we don't really have cholla or whatever you call it, so I grabbed a piece out and there was like six or seven little thorns sticking in my hand, but it's all good, it was worth it.