PGA Tour star Hideki Matsuyama has addressed the LIV Golf rumours yet again before he attempts to defend his title at the ZOZO Championship in Japan. 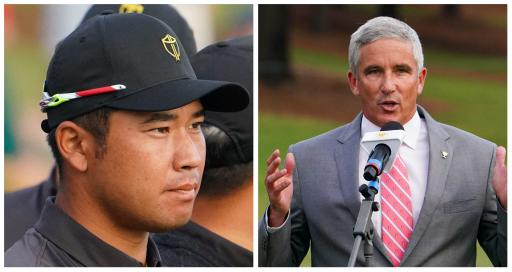 Japan's Hideki Matsuyama has re-affirmed his commitment to the PGA Tour amid speculation linking him with a move to LIV Golf ahead of the ZOZO Championship.

In comments that will clearly please PGA Tour chief Jay Monahan, the 2021 Masters champion says he's "never been prouder" to be part of the established, American circuit.

Matsuyama is the defending champion of this event and will peg it up at Accordia Golf Narashino Country Club with huge pressure to perform in front of his home crowd.

The eight-time PGA Tour winner, who won this tournament by five strokes ahead of American Cameron Tringale last October, faced the media on Tuesday where he was asked to confirm his future intentions.

Is he "solidly" with the PGA Tour?

Actions speak louder than words, but it will be interesting to see if Matsuyama is a man of his word.

Matsuyama has reportedly been offered somewhere in the region of $400m to join the LIV Golf Tour such would his draw command in the Asian market.

To put that into context, Phil Mickelson all-but confirmed his fee was $200m for joining the breakaway tour.

The 30-year-old Srixon staffer was present in the famous players' meeting with other PGA Tour stars before last season's FedEx Cup Playoffs in August.

That meeting was orchestrated by the likes of Tiger Woods and Rory McIlroy as the elite players reportedly tried to work out a way to deal with the threat of LIV Golf.

The result of that meeting saw the PGA Tour's best players agreeing commit to playing together in events more often to deliver a better product for the viewer.

The players who attended the meeting were:

According to various reports, Matsuyama was reportedly torn between "money and legacy".

The only player who was in attendance at that meeting who has joined LIV Golf is Joaquin Niemann.

Patrick Cantlay and Xander Schauffele are now heavily linked with a move.

LIV Golf heads to Jeddah this week for their penultimate event of their inaugural season.

Matsuyama will play the first two rounds of the ZOZO Championship alongside Schauffele, Peter Malnati and Satoshi Kodaira.