Bryson DeChambeau's return to the golf course may not be too far away. 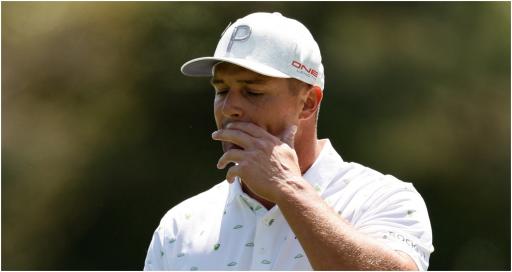 Bryson DeChambeau is nearing his return to professional golf after undergoing surgery on a hairline fracture in his left wrist.

DeChambeau's last event was the first major of the year where he missed the cut at the Masters despite attempting to play through the pain.

The 28-year-old has also been nursing an injury to his hip which occured more than two years ago when he started his pursuit for more speed.

DeChambeau defied the orders of his doctors and the advice of his coach to peg it up at Augusta National but the allure was just too much.

But the return may not be too far away. He wrote on Twitter: "Stitches are out today. Hand is feeling better day by day.

"Excited to be able to hit golf balls again when the time is right."

Stitches are out today. Hand is feeling better day by day. Excited to be able to hit golf balls again when the time is right.

DeChambeau has not been totally inactive. He was back in the gym doing work on his lower body and core not long after surgery.

He was also filmed ripping a drive one-handed before a charity event.

But there is no denying that the World No.18 faces a race against time if he is to play the next major championship of the year.

The PGA Championship will take place at Southern Hills over May 19-22. DeChambeau had surgery on April 14.

Typically, a surgery that the 2020 U.S. Open champion underwent would mean a recovery time of 10-12 weeks.

Both Phil Mickelson and Tiger Woods could be in the field at Southern Hills if reports are to be believed.