Rory McIlroy was not happy with the weekend setup at Bay Hill and complained: "You do not get rewarded for good shots" 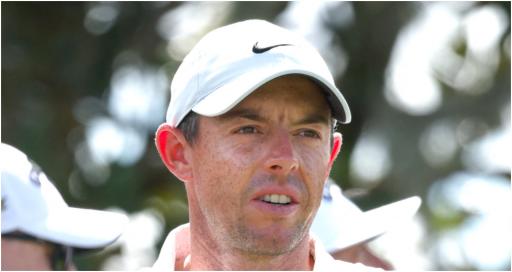 Rory McIlroy lashed out at the setup at Bay Hill after a tumultuous weekend at the Arnold Palmer Invitational.

McIlroy, 32, opened up a big week ahead of The Players with a stunning 7-under 65 which catapulted him to the top of the leader board.

But what transpired over the weekend was something very familiar we have seen from him in recent years: it was a struggle.

The course was tough, of course. In many ways, it was brutal. Yet that didn't stop McIlroy letting off a little bit of steam after his round.

McIlroy ended up finishing T13 at Arnie's place. He followed that opening 65 with a 72, and then two rounds of 76.

That final round on the PGA Tour included a three putt from all of three feet at the par-3 seventh hole. And a club snap.

A  dejected McIlroy said: "I feel punch drunk, to be honest. The weekend, it's like crazy golf. You just don't get rewarded for good shots. Like I'm venting here and I'm frustrated and whatever.

"I think as well the frustration is it's a carbon copy of what's happened the last three years here. I started off really, really well with a 66 or 65. Friday afternoon conditions got a little tougher. Then over the weekend it's sort of been the same stuff.

"So three years in a row it's sort of been start off, lead the golf tournament, then you just sort of regress and come back to the field each and every day. Yeah, it's frustrating. It's hard to keep your patience out there."

More: Scottie Scheffler holds off Viktor Hovland for another win

McIlroy got off to a brilliant start to the week. But by the end of it he was snapping his wedge as Scottie Scheffler showed once again what a big time player he is and will be in the future.

The Ulsterman added: "Sort of the way the conditions are, it makes you feel as if you're not playing as good as you are. Like I'm playing good. I'm hitting good shots.

"I'm swinging the club well. I'm chipping well. I'm putting well. But it can knock your confidence whenever the conditions are like this.

"I'm certainly playing better than shooting 8-over over the weekend. It's just a matter of trying to regroup and forget about this week, and next week's going to be a completely different test."

The richest tournament at TPC Sawgrass is only one week away, something that McIlroy believes was in other players' thinking by choosing to skip Bay Hill.

So does McIlroy believe they should think about changing the setup in the future? Absolutely.

He said: "Yeah, they need to do something about it. There's a lot of guys that sort of stay away this week to get ready for next week. Next week's become such a big event, $20million purse. The four majors are sacred in this game, but it's very close to being among them with the way it's going.

"As I said, I just need a day off tomorrow to forget about what's happened this week and then just sort of focus on next week."

He wasn't finished there.

Next page: Rory McIlroy stares down golf fan after getting abuse