PGA Tour pro Billy Horschel has opened up on his fishing exploits with Cameron Smith after he won the 150th Open Championship at St Andrews. 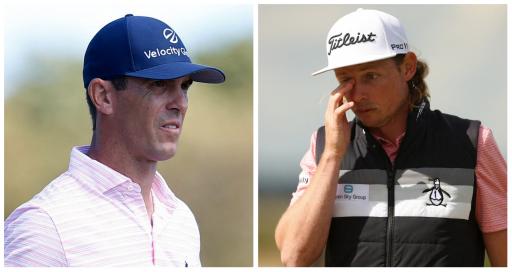 PGA Tour pro Billy Horschel has opened up on how his fishing competition with Cameron Smith came about after the Australian captured the 150th Open Championship at St Andrews.

Both Horschel, 35, and Smith, 28, are keen anglers and decided to use their downtime after an exhausting major season to compete in a fishing competition.

As it turns out, it was actually Horschel who asked Smith if he could head out on the water as he realised there was an extra spot on the boat.

Unfortunately for both, their efforts were not quite good enough to win the Greater Jacksonville Kingfish Tournament.

Though at one point the pair did actually hold the lead after Horschel landed himself a 29-pounder.

You might remember some other interesting stories with regards to Smith and fishing. He was once caught red-handed fishing in Harbour Town Golf Links and asked to leave.

Fishing is prohibited at the site where the PGA Tour hosts the RBC Heritage.

Anyway, Horschel spoke to the media this week ahead of the Wyndham Championship and explained how it all came about.

"And then he doesn't have three kids he has to worry about hanging out with and enjoying and going to their activities and school, so my time's a little bit more already taken from that.

"But we were at The Open Championship and his caddie, Sam Pinfold, Pinner, was out on the course and I was like, 'What are you boys doing the next couple weeks?'

"And I knew his boat had room for more, so I saw Cam the next day. I said, Cam, I've got a question and you're welcome to say no, I said, Can I hop on the boat and go in the kingfish tournament with you? He said, sure."

He continued: "Like I said, he's one of my good friends. We see each other a lot, we fly together a lot, we spend a lot of time together when we're home, we have gone fishing before.

"So that's how it all came about. We went out just to have an enjoyable day. And listen, I'm an 18 handicap when it comes to fishing. I don't know everything.

"I've been around fishing my entire life with my uncle and some of my family members, but I'm not as knowledgeable and understanding of a few things as maybe Cam and a couple other guys on the boat were, but I could hold my own.

"So we just did a really good job of having fun and we got lucky to catch really two nice kingfish that allowed us to finish in I think fifth or six place in the aggregate, so it was an enjoyable day.

"I think Cam just wanted to have a great time, especially after winning The Open Championship, and then afterwards we were just at his house and a lot of friends came over to sort of celebrate his victory for the first time that weekend.

"Cam, I love the kid to death, he's an unbelievable person and he's got a big heart and I love the guy and I was so thrilled to see him win the tournament.

"Like I said, that Friday was a day for him to get away from things and enjoy being out on the water with friends and catch a fish or two and that, we did."

Next page: Bryson has a bold prediction about LIV Golf future