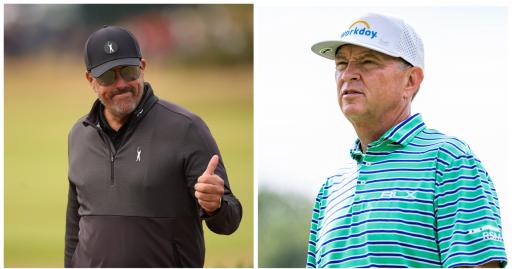 Speaking yesterday ahead of the Wyndham Championship, Love claimed that he did not believe it was right for players to "cherry pick events".

He paid tribute to what Martin Slumbers, the chief executive of the R&A, said ahead of the 150th Open, saying the majors were on the right path.

Love, who captained the United States in the Ryder Cup twice, described the whole situation as "unfortunate".

But ominously, he warned that "we" [the players] hold all the cards. "Not Seth Waugh [PGA of America CEO] or Mike Whan [USGA CEO].

Love claimed that the LIV Golf players are now "spinning their decisions" in interviews as they know "they have turned their backs on their friends."

USA Presidents Cup captain Davis Love III has hinted at a major player boycott if LIV golfers are able to return to the PGA Tour pic.twitter.com/tWg29opEwh

For full context, this is what Love said when he was asked about where the game finds itself these days.

"Well, you know, the whole situation is unfortunate," he said.  "I didn't try to single out the U.S. Open as the players striking or not -- threatening not to play.

"I was saying that if the LIV guys sue and are allowed to play on the PGA Tour, that the players are enough fed up with it, we understand that we make the rules on the PGA Tour and the commissioner's enforcing our rules and we don't want those guys playing, come and cherry picking our tournaments, that we hold all the cards, not Jay or not Seth Waugh or Mike Whan.

"They don't hold all the cards, we hold all the cards. If we say to the FTC [Federal Trade Commission] and to Washington, no, we support the rules, we don't want those guys playing, we don't care what the courts say, our only option really, the nuclear option is to say, well, fine, if they have to play in our events, we just won't play.

"I think the Tour players, the Max Homas and Rory McIlroys have done a good job. I think the undercurrent of guys are getting more and more fed up with it, that these guys are threatening our way of life, they're trying to take money out of our pockets and cherry pick our best tournaments.

Love previously spoke of being lied to by some players.

Asked whether or not he feels he has been betrayed as a captain Love said: "Look, I told the players that I've talked to that have gone or thinking about going, it's your decision, you know, and you do what's right for you, but understand consequences.

"But understanding the consequences, you signed up for these rules. And I keep using it kind of as a joke, but I'm wearing shorts today but I can't wear shorts on Thursday, that's a rule.

"You're getting -- I said fixing to, but you're fixing to break a rule that's a big rule and you're going to get penalized for it.

Before he left his press conference, Love admitted that he - much like McIlroy - felt like LIV would run out of steam.

McIlroy previously jumped the gun, suggesting that the Saudi-backed series was "dead in the water".

Love said he was wrong.

"I told Jay a year ago and you can ask him, I said don't worry about it, it's not going to happen.

"I was completely dead wrong. Six months ago I told my own tournament, oh, don't worry about it, not going to happen. [Phil] Mickelson's going down, but nobody else will jump ship.

"So I was wrong. I don't know what's going to happen from here on out, but I know it's going to be a fight and the players are getting more and more unified against it.

"Now, some guys said that they don't like the new schedule and some guys don't like the old schedule. I might not like the fall schedule right now, but it's going to work out because I'm on board with whatever the Tour wants to do.

"It will work out because I know the staff doesn't work for Jay exclusively, they work for the players and so does Jay"

Next page: LIV Golf Bedminster tickets were selling for... $1