"I've had a lot of love": Jason Day opens up about his mother's death

Jason Day spoke to the media for the first time after the death of his mother at the Valspar Championship on the PGA Tour. 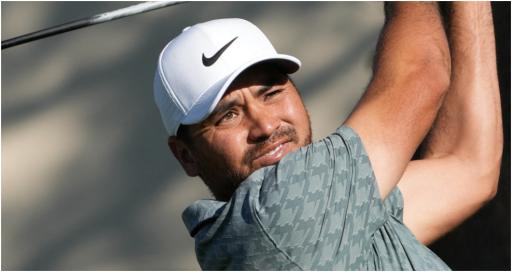 Jason Day has opened up on the tragic death of his mother, saying he'd be "struggling a lot more" if he was at home.

Day has opted to play the Valspar Championship at Innisbrook Resort just two weeks after his mother died five years after being diagnosed with lung cancer.

The former World No. 1 says that since getting back inside the ropes with his "second family" on the PGA Tour he has received "a lot of love from the guys".

Day told the PGA Tour official website: "I'm okay. I'm doing alright. I'll tell you what, if I was at home, I'd probably struggle even more.

"It's nice to be out here with everyone, and I've had a lot of love from the guys."

Day's mother Ardenal Day - she was referred to as Dening - was 65 years old when she died on 2 March, surrounded by her family.

She was reportedly given one year to live in 2017 but fought on for a further five.

Day has previously endured tragedy when his father Alvyn died of stomach cancer when Day was only 12 years old.

The Australian previously withdrew from the WGC-Dell Technologies Match Play five years ago after he gave an emotional press conference about the dreadful diagnosis.

Day told the media that he simply could not focus on golf and withdrew.

The 34-year-old posted a photograph on his Instagram announcing her death. "We are heartbroken but incredibly grateful for the gift we had in her living with us for the last almost two years full time," he posted.

"She fought so hard until the very last breath. I am forever indebuted to her for the sacrifices she made for me to be successful, and for the person she helped me to become. We will miss her so much."

Day also played at TPC Sawgrass and was on the foul end of the draw. He shot 68-78 and missed the cut.

The 12-time PGA Tour winner has shown glimpses in recent weeks and months of the player we know he is capable of being.

At Pebble Beach he was well in contention down the stretch but his charge fizzled late on.

His round included a sensational hole out for eagle with a glorious wedge shot.

Day said: "My golf is good. I've just got to tighten up a few things. A few more fairways today [at Valspar] would have been nice, and a couple more putts could go in.

"Overall, I think it's moving in the right direction, which is a good thing. First and foremost, I feel healthy, so I'm happy about that, too.

"It was a different part of my life. I had a lot of good things moving forward that were keeping off-course and on-course balance.

"Now, over the last two or three years, with injuries, and my mom, things have been out of balance."

Day has yet to qualify for The Masters. But his answer about potentially having a week off if he doesn't get there was refreshing.

"The goal is to try to get there. And if not, sometime's it's for the best," he said.