Spanish World No. 3 Jon Rahm struggled in the opening round of the Farmers Insurance Open on the PGA Tour at Torrey Pines. 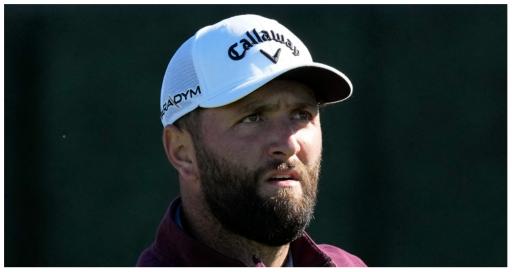 Frustrated Jon Rahm saw his streak of 12 consecutive under par rounds come to an end after a sloppy opening round at the Farmers Insurance Open at Torrey Pines.

Rahm has four wins in his last six worldwide starts but was well off the pace in California and found himself nine strokes adrift of the early leaders.

The Spanish World No.3 is seeking to become the first player since Dustin Johnson in 2017 to win in three straight starts on the PGA Tour.

He couldn't have picked a better venue to attempt to make history as he has twice tasted victory here.

Related: How Jon Rahm can return to World No.1 this week

He told reporters he was aware how rare the feat is in his pre-tournament press conference.

But he cut a frustrated figure and let the F-bombs fly in his opening round on the South Course alongside Justin Thomas and Tony Finau.

Rahm birdied No. 2 and No.5 but he threatened to erupt after carding a double bogey at No. 7.

Two more bogeys followed on the back nine and after hitting his tee shot left into the fairway bunkers at 18 he repeatedly smashed his driver into the grass.

Viewers in the UK were apologised to by Sky Sports for the Spaniards foul language which was picked up on the hot mics.

Rahm chopped his way up 18 and settled for a 1-over par opening 73.

By day's end it was Sam Ryder, Aaron Rai and Brent Grant (64) who shared the lead at 8-under.

Sahith Theegala is also inside the top-10 with Collin Morikawa lurking in T-12.

The aforementioned Thomas carded an opening round of 4-under whilst Finau struggled like Rahm, also shooting 1-over and is danger of missing the cut.

Xander Schauffele has returned from a back injury and shot a level par opener.

Leaderboard after round one: