Former World No.1 Jon Rahm came up clutch for new dad and fellow PGA Tour pro Max Homa when he returned from the hospital with his baby boy. 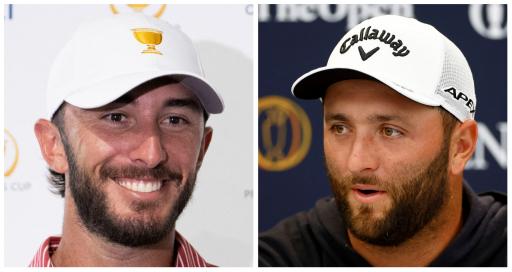 Jon Rahm was on hand to help new dad and fellow PGA Tour pro Max Homa after he welcomed the birth of his baby boy.

Homa, who now has five PGA Tour wins to his name since 2019, was delighted with the arrival of Cam Andrew Homa on October 30.

He paid tribute to his "super hero" wife Lacey after there was reportedly a few complications during the birth.

"He is healthy, peaceful, and happy. Full transparency, Lacey had some complications and had to have multiple surgeries. She spent quite a bit of time in the ICU. Fortunately, she was released to the postpartum room earlier today and finally got to be with me and reunited with Cam. We are so happy and on the long road to recovery. Thank u to everyone who has reached out to help. It means the world to us. We are already so in love with him."

It also appears that former World No.1 Rahm and his wife Kelley Cahill were on hand to make sure the Max, Lacey and Cam were well stocked when they finally returned home after what presumably was an exhausting time in the hospital.

Rahm and his wife had their second son, Eneko, in August.

Homa has not confirmed when he will return to the course, but he will be expecting big things in 2023.

His most recent victory came at the Fortinet Championship before he represented the U.S. in the 2022 Presidents Cup where he went 4-0.

Homa is now ranked No. 18 in the Official World Golf Ranking.

"The best parenting advice I have is just take care of your wife, that's it. The wife is the one that runs the home, and women run the world. My mom and my wife are two of the strongest people that I know, probably the two strongest people that I know. The best advice I have for any husband is take care of your wife. If Max does that, the family and the kids will be just fine."